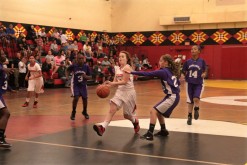 BRIGHTON — For the second time this season, both Pemayetv Emahakv Charter School boys’ and girls’ basketball teams played their biggest rival, Yearling Middle School, Jan. 14. Although both teams lost, the PECS players showed growing strength and skill in each game.

The girls’ team beat Yearling the week before but fell short the second game with a score of 27-63, partly due to missing players. Star point guard Sunni Bearden missed the first half but came in strong and scored some points for the team during the second half.

Coach Tim Thomas said the team has a strong defense but needs someone to step up on offense.

“Hopefully we can finish strong,” he said.

“We are a team that never gives up,” Jackson said. “They play hard all the way through, [whether] we’re down or up; it doesn’t matter.”

Jackson said despite the team’s inexperience, they continue to improve and work hard.

“There’s been some challenges but we’re working through them,” he said.

Jackson said one of the team’s advantages is team leader Richard Harris, who plays guard and forward and leads the team in scoring and defense.

During halftime of the girls’ game, PECS elementary school students filled the court for a special performance in which the children sang and danced to What Does the Fox Say? The kindergarten through fifth-graders donned masks and matching outfits for the show, choreographed by P.E. teacher Kim Jackson.