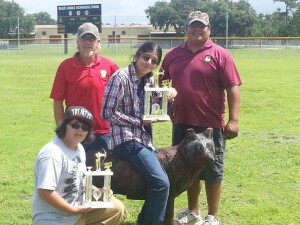 BRIGHTON — Pemayetv Emahakv Charter School boys tested their skills at the archery range on May 22. P.E. teacher Chris Goodwin spent two weeks teaching archery to the boys in sixth, seventh and eighth grades and held friendly competitions inside the gym.

The Recreation Department posed the idea to have the boys shoot outside in the woods using 3-D targets to test their skills at different distances. The 36 boys were separated into groups of four with a Recreation staff member to keep score and assure safety.

Fifteen various life-size animal targets were set up from 10-25 yards away and each archer had two chances to shoot them.

If they hit within the kill zone, they were awarded 20 points; a hit anywhere outside the kill zone was worth 10 points, and no hit was zero points.

At the end of the competition, the boys competed in a survivor hunt with only one arrow and one target placed 50 yards away. One by one, each boy had a chance to hit the target. If they missed, they were out until only one boy was left standing. After two rounds, Pernell Bert and Morgan King were the only survivors.