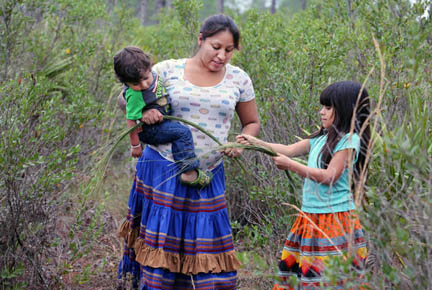 Early in the morning of Feb. 27 a small contingent of Seminoles journeyed to the isolated fields of Yeehaw Junction to pick sweetgrass for basket making and carry on a tradition that has endured for generations.

The Hollywood Culture Department brought them to Yeehaw, where sweetgrass grows abundantly, to teach how and where to find the wild grass that grows among the saw palmetto.

Madeline Benard brought her 6-year-old daughter Victoria, the reigning Little Miss Seminole, and her 2-year-old son Duke to the outing. She said she wanted to show Victoria how women in the Tribe collect sweetgrass.

“When we get home, I’ll show her what to do with it,” Benard said. “I want to show her what it means in our culture to be a woman.”

The art of Seminole sweetgrass baskets began in the 1930s when women crafted them for selling to tourists. Over time, the baskets became a traditional tribal art form along with patchwork and dolls. The baskets are constructed by making coils from the dried grass and stitching them together with colorful thread.

About the width of thin spaghetti, sweetgrass grows in the underbrush of saw palmetto, typically found in pine forest thickets. It must be picked carefully to avoid being scratched by the sharp edges of the saw palmetto fronds.

Culture teachers Myra Frank and Bonnie Williams showed the women how to locate the longest grass, which is best for making baskets, and then the women started picking.

“Women who make baskets have to learn to get it themselves,” said Frank, who doesn’t make baskets anymore because of carpal tunnel syndrome, but she picked bundles for those who need it.

The women collected in groups, but each found their own clumps of sweetgrass growing under the palmetto. For three hours, they moved deliberately from one palm to another.

After picking a load of sweetgrass herself, Amaya Shenandoah, 13, gave each woman string to tie their bundles together.

Lorelei Tommie, 20, made her last basket when she was 8 years old. She recently started making another in the Hollywood Culture Department with the help of Fairuza Billie, 17.

“It’s something we should all know,” said Fairuza, who has made four baskets. “It should be passed down through families, but now it’s done through Culture.”

Tommie said she is disappointed that few in her generation are continuing the tradition.

“It’s not hard; it just takes a lot of time,” she said. “I can understand why people can get bored with it, but it’s rewarding in the end. I look at my basket now and I’m so proud of it.”

Lacey Jordan, 23, had never picked sweetgrass before the outing, and has yet to make a basket, but she intends to learn.

The excursion was a multigenerational affair that provided quality family time for Williams, her daughter Benard and grandchildren Victoria and Duke.

“I learned about plants and Mother Nature,” Victoria said. “I’m going to learn how to make a basket out of these and I’ll get to spend time with mama.”

Another tradition the Hollywood Culture Department is actively trying to pass down is the making of mosquito nets. The department has helped Tribal members make them for two years, but the tradition of using mosquito nets dates back to life in the Everglades.

“It’s a hot commodity,” said Frank, culture center assistant manager. “You put it over your mattress to protect you from mosquitos.”

The department had plenty of materials on hand in early March to help whoever wanted to make mosquito nets for use while staying in chickees. The nets are made of lightweight, opaque muslin, which offers individuals some privacy when sleeping in a camp with others. Made of five panels, the nets have loops on the top panel corners that attach to hooks on the ceiling of sleeping chickees. Once in place, the nets are tucked underneath the mattress.

“They are like tents hung from inside chickees,” said Allison Osceola, who fashioned a doll-sized mosquito net as a demonstration model.

Bobby Frank, community culture center manager, said the culture event aimed to pass down the knowledge to the next generation. He said that while mosquito nets were used for everyday living in the Everglades, they still have practical uses today.

“If you have a chickee and you sleep outside, you are going to need it,” he said.