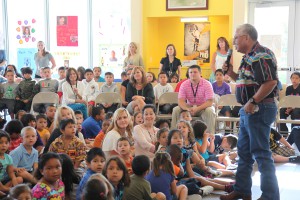 BRIGHTON — Students of Pemayetv Emahakv got a lesson on Tribal Government Sept. 12 when Brighton officials Council Rep. Andrew J. Bowers Jr. and Board Rep. Larry Howard stopped by to speak with students on the importance of government as they prepare for the upcoming Student Council elections.

Students recently began learning about the governmental process in their history classes by studying past government leaders, their positions and what they do.

The Charter School runs its Student Council similarly to the Tribal Council, with an elected Chairman and representatives for each grade level. Students also campaign by putting up posters to gain support. The school holds an election, followed by an inauguration.

“I’m just amazed at how many of you are running for office,” said Principal Brian Greseth. “That means you care a lot about your school.”

Brighton Council Rep. Bowers started his speech speaking about the importance of education and spoke briefly on his “other life.”

“I joined the military, got a college degree and became a lawyer,” he said.

“I think you have to be involved with your school,” Rep. Bowers said. “You have to listen to people and talk to fellow students. Learn how they feel about certain things.”

Rep. Bowers briefly explained how the election process for Tribal Council works. He told the students how individuals must get a petition with signatures of people who agree to vote for them. He went on to say candidates have three to four weeks to campaign and then elections are held.

“You have to let them know what you are capable of doing,” he said.

“I speak up for the community, such as if we need that road fixed,” explained Rep. Bowers.

Board Rep. Howard continued on the subject of government by telling how he got into politics.

“I’ve worked with the Tribe pretty much my whole life,” Rep. Howard said. “My family was always into politics.”

Rep. Howard also stressed the importance of education, advising the students to never forget to keep their grades up.

He also pressed the importance of being able to speak in front of people when it comes to government and politics.

Rep. Howard wrapped his speech up with a very important note. “The sky is the limit, but make sure you’re serious about it.”