The event’s schedule was filled with opportunities for educators to grapple with issues facing Native American students and learn from each other’s successes and challenges at workshops, general sessions and networking functions.

“We are all here for the same thing, to improve our education programs,” Chairman Osceola said. “We are here to collaborate as a group so we can educate our children and grandchildren to ensure a better future for our people.”

Emcee Lewis Gopher regaled the crowd with facts about the Tribe and the efforts to keep culture relevant in the 21st century.

“We want to give you a glimpse of our way of life,” said Gopher, president of the PECS ParentTeacher Association and Council special events coordinator. “We still sing the songs that are 500 years old. We have to keep our culture alive, which keeps us strong.”

Gopher explained how Seminole children received an education over the years. Before the 1930s, when they started going to white-majority government schools, Tribal kids learned around campfires just like their ancestors did. The transition from learning in chickees to school rooms was hard for some, but in 1957 the first Seminole graduated from high school and in 1962 the first one graduated from college.

“We struggled, but that gave us strength,” Gopher said. “Our blood has that strength in us. We’ve accomplished a lot in 60 years. Now we have 1,652 K-12 students and 202 more in higher education. We still battle drop-outs, drugs and alcohol, but it is conferences like this where we can share and build each other up that helps us all succeed.”

After PECS students and teachers starred in a fashion show for the crowd of 700 to 800 attendees, medicine man Bobby Henry led hundreds through the pavilion in a massive friendship dance. Billy Walker and David Weathers followed with an alligator show. Walker entertained the crowd as he wrestled a feisty gator, caught just two days prior.

Displays by Pemayetv Emahakv Charter School, the Ahfachkee School and the Ah-Tah-Thi-Ki Museum filled one side of the large pavilion; an array of cultural items and activities were set up on the other side. Chairman Osceola, Trisha Osceola, Geraldine Osceola, Bobby Frank and Paladin Willie showed off patchwork, dolls, beadwork, sweet grass baskets and carvings as they answered questions from curious guests.

The educators weren’t shy; they studied the displays and asked plenty of questions.

Tesia Zientek, director of education, and Channing Seikel, college advisor of the Citizen Potawatomi Nation in Shawnee, Oklahoma, were fascinated by what the Tribe has done at PECS.

“I’m interested in charter schools since there is a budding charter school movement in Oklahoma,” said Zientek. “I’m inspired by what the Seminole Tribe has been doing.”

The opening ceremony and general assembly the following day featured the Seminole Color Guard and the Southern Horse Singers, whose drums and chanting filled the room as they sang the flag and victory songs.

Alaska Native and NIEA President Yatibaey Evans opened the assembly by thanking the Tribe for the warm welcome and introduced Bobby Henry, who said he learned everything he knows from his family and Tribe. He said a prayer to start the day.

“Thank you Bobby for reminding us of the many different types of education,” Evans said. “My grandmother kept culture alive for me. Aside from education, there are other means of success; cultural values, Native language, resiliency, strength and family. If you have those, it makes you successful.”

PECS was featured during an informative panel discussion about the perspectives and opportunities for Native school choice in Indian Country. Principal Brian Greseth joined Navajo Nation President Russell Begaye, University of Hawaii’s Walter Kahumoku III and founding director of the Sovereign Schools Project Phil Gover on the panel where they shared experiences of how they have improved the education of Native American students.

Each panelist gave a brief overview of their programs and then answered questions by Evans, who served as the facilitator. The subject of school choice was first on the agenda.

“It means students get to learn and use their native language,” said Kahumoku. “Cultural traditions are perpetuated in the community and in households to assure Hawaiian identity is upheld.”

Kahumoku said Hawaiian and English are both official languages of Hawaii and 30,000 people speak it fluently. They have language immersion from preschool through higher education.

“School choice is a vital tool that tribes can use to expand their sovereignty,” Gover said. “Oklahoma gave tribes the authority to operate their own charter schools, which is an important expression of sovereignty. Charter schools give tribes leverage they never had, but it also puts them under state law.”

Greseth gave a brief history of how PECS was created, which began with students being pulled out of classrooms in Okeechobee one day a week to learn language and culture from a group of “grandmothers” in Brighton.

“The community realized that wasn’t enough, so they worked to open their own school,” Greseth said. “They chose a charter school that would allow students to learn language and culture as well as the regular state standards and assessments.”

The school opened in 2007 and has more than 300 K-8 students; an immersion class for infants was added two years ago. The school began with a vision of teaching language and culture, but there was a question of whether non-Tribal students should be exposed to the language.

“The school means everything to the community,” Greseth said. “They saw the big picture and they decided they needed to save their language. We have about 30 fluent speakers and we utilize them as much as we can because we know they are the ones who will keep the language alive. We always listen to our constituents, PTSO and community members; we love their input. These conversations have helped us develop a very successful school.”

The Navajo Nation, located in Arizona, New Mexico and Utah, is larger than the state of West Virginia and has 85,000 K-12 students and 238 schools. President Begaye said their student body is larger than many tribes.

“Navajos had no choice, boarding school was the only choice,” he said. “It was illegal to speak your language. For years the government said being Indian was not good and learning our language would set us back; it was dehumanizing. Now we have it all but we have to get back to teaching our language, culture and traditions. It defines who we are as a Nation and a people.”

Language immersion in the classroom

Losing language was a hot topic at the convention and most of the workshops were standing room only. At the Native Languages Alive workshop, Marcus Briggs-Cloud, who runs the language immersion program at PECS, defined the issue very clearly.

“We all learned to be fluent because we were immersed in language,” he said. “Language programs should set goals and there should be only one; fluency.”

Briggs-Cloud said fluency cannot be achieved in 30 minute a day classes. He knows many people who have been teaching language for 30 years, which has resulted in no fluent speakers.

“We have to be motivated to do more,” he said. “Don’t ask permission or debate it, just get up and do it. The kids in our program speak the language because we talk to them in it.”

“All you have to do is speak and speak to the children and they will catch on,” said NIEA Elder of the Year Jennie Shore, who teaches in the immersion program. “I want people to learn the language. Whatever I know, I’m willing to share.”

Briggs-Cloud said what they are doing in the immersion program isn’t new; it’s how everyone learns to speak.

“We aren’t trying to make second language speakers fluent, that doesn’t work and we don’t have time for that,” he said. “If you want your children to speak like these elders it takes radical thinking. Jennie’s grandfather kept her at home and taught her in Creek and Mikasuki. That’s why she’s fluent.”

When he was designing the program, Briggs-Cloud asked some elders what makes a Seminole a Seminole. Their responses included language first, then clans, participation in ceremonies, stories to provide a sense of place in the world, medicine and cultural laws, endogamy (marrying back into the community) and teaching your own people. Those criterion are also necessary for a successful language program.

“Few people meet those criteria so we want to work toward that,” Briggs-Cloud said. “It has nothing to do with blood quantum.”

To recruit participants in the program, Briggs-Cloud approached Tribal members with babies and interviewed them. The program takes a significant commitment and places a few rules on parents; they must take their children to see an elder once a week and volunteer in the school once a week.

Inside the PECS immersion program, which is housed in its own building and has the ambiance of a home, the 13 children and six teachers speak only Creek. Visitors who don’t speak the language are sent to a separate room to speak to another adult in English.

e a three-year-old daughter in the program who out-speaks me,” she said. “This is real, it’s working. They don’t speak like me; they speak like they are old. It’s so cute.”

Fluent speakers have valuable and irreplaceable knowledge; the goal of the language immersion program is for it to live on in the next generation. Briggs-Cloud believes that instead of teaching language, those who know it should just speak it.

“Plant your garden, cook with your children, read to them and make them speak it back to you,” he said. “Flood the place with your language, they will learn it.” 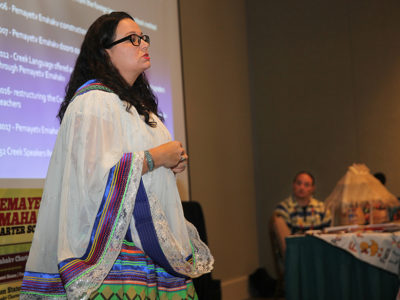 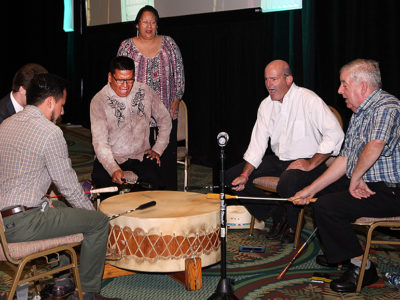 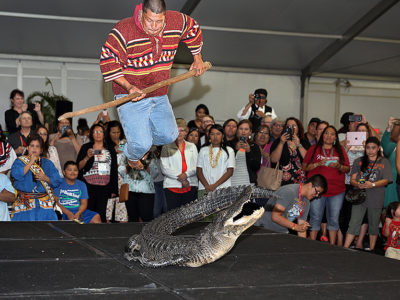 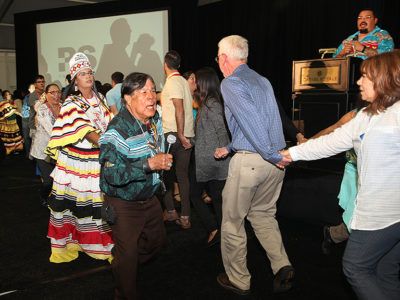 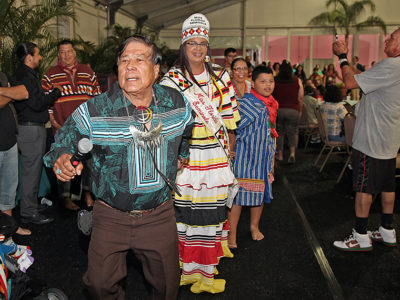 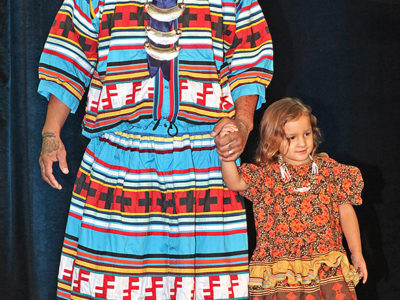 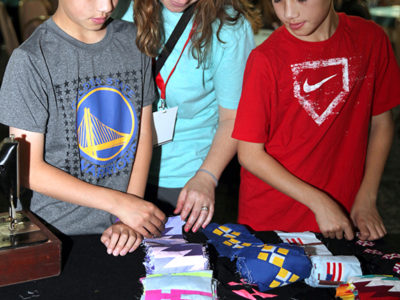 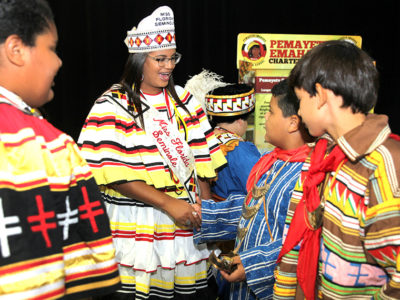 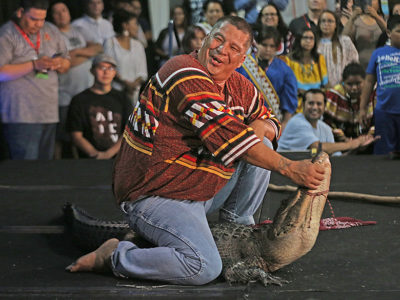 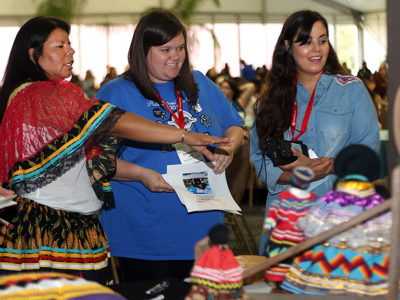