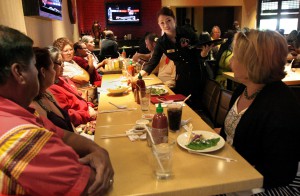 HOLLYWOOD — About a million people gamble at Hard Rock Hotel & Casino Hollywood each month and Asians represent a large number of them. To satisfy players’ hunger, restaurants abound in the hotel and on the casino floor but none offer genuine Asian food. Until now.

The BOL restaurant opened May 8 to great fanfare, including traditional Chinese Dragon and Lion Dances which usher in good luck and good fortune. The restaurant has two chefs, one Chinese and the other Vietnamese, who prepare authentic food from their home countries.

“We wanted to do something the casino needed,” Hollywood Board Rep. Chris Osceola said. “This was a perfect match because a lot of Asian customers were leaving the casino to eat.”

Those customers often went to a local Vietnamese restaurant a few miles west of the Hard Rock. Members of the Board went to the restaurant and were impressed with its authenticity. To ensure the same quality food at The BOL, the Board hired the chef and owner Jacky Truong to duplicate his traditional recipes at the Hard Rock.

“If my customers see I’m here, they will stay and play,” Truong said. “I’ve been looking for an opportunity like this all my life. It is the best thing to be a part of this restaurant.”

Chef Truong specializes in Vietnamese pho, a traditional noodle soup with various meats, vegetables and herbs, while Chef Albert Yip offers Chinese/American dishes. The 51-seat restaurant has a prime location adjacent to the hotel entrance in the former site of the Tribal gift shop.

A large crowd gathered at the grand opening event and was dazzled by the music, beauty and extravagance of the Dragon Dance. Revered by Chinese people, the dragon is a symbol of power and brings good luck.

The lion signifies courage, stability and superiority and is a powerful symbol in Chinese culture as well. The Lion Dance chases away evil spirits and finds fortune in the form of greens. Once the lion finds and “eats” the greens – in this case, a head of lettuce hanging by the front door of The BOL – financial success is ensured.

“The Board is always looking for enterprises,” President Tony Sanchez Jr. said. “[Rep. Osceola] had the idea to convert the store to a restaurant. He did his due diligence and worked with the casino staff to make sure there was a need for it. This is a big day.”

The Tribe’s operating partners in The BOL are Eric Douglas and Ross Mamunur. The festive opening was capped with an American tradition – a ribbon cutting ceremony.