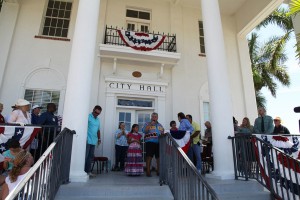 EVERGLADES CITY — With the completion of the Tamiami Trail in April 1928, a road connected Miami – through the swampy gator- and panther-infested Everglades of Florida – to Tampa.

To the Seminole and Miccosukee Indians, the road was “a gift they could have never imagined,” said Chairman James E. Billie, who spoke at the 85th anniversary of the Trail’s opening on April 27 in Everglades City.

“We were out living in the swamps and in the 10,000 Islands in different hammocks,” he said. “When they made the road through here, instead of poling a canoe all day to get to Chokoloskee or Everglades City, we could live along the road on the overburden they piled alongside the road…It made it a lot easier.”

Previously isolated in the swamps of South Florida since the end of the Seminole Wars decades before, the Indians suddenly faced a new world order as lines of cars passed by their traditional villages and camps. But Chairman Billie said they found ways to maintain a balance between traditional ways and modern society. They earned money selling crafts, dolls and clothing to tourists, wrestling alligators, and putting their villages on display for people to see.

“The Trail opened up a whole new world for [the Seminoles],” he said.

But it almost did not happen.

When a lack of funding stalled the completion of the Trail in 1923, a group of adventurers who called themselves “The Trail Blazers” set off to rekindle interest in the road and publicize the need for a cross-state highway in the Everglades. Russell Kay, who organized the expedition and helped prove that Tamiami Trail was feasible, documented the journey in his “Tamiami Trail Blazers: A Personal Memoir.”

“It was important for people to travel across the Everglades and look at it. But to the Indians, it was important because they could find a dry place to put their chickee huts next to the road,” Chairman Billie said.  “It improved our quality of life.”

Hundreds gathered at the steps of City Hall for the anniversary celebration. At the old building, the Collier County Sheriff’s Office Honor Guard raised the flag and Glenna Potter, a guidance counselor at Everglades City School, sang the national anthem.

The event sought to recreate the opening of the Trail 85 years ago. Just as there was a circus then, the Sailor Circus performed two shows. It also included a fish fry, storytelling and a guided walking tour of historic sites.

“On this day 85 years ago, there were thousands of people here in town at the first Collier County Fair and Tamiami Trail Exposition,” said master of ceremonies  Ron D. Jamro, the Collier County Museum director.

Entrepreneur/developer Barron G. Collier, whose own personal fortunes jump-started the construction of the Trail when the government balked, was there on April 26, 1928 when the road opened.

Collier’s own words, delivered on the same steps, were read again 85 years later by Craig Woodward, president of the Marco Island Historical Society:

“Today the eyes of the world are focused on Florida and the world sees the completion of the greatest highway that this splendid peninsula has ever possessed…The Tamiami Trail is finished. The impossible has been accomplished. It couldn’t be done. But Florida did it.”

The ceremony ended with Immokalee Rep. Fred N. Thomas, an active promoter of Collier County tourism, calling Chairman Billie and Mayor Hamilton to grip hands together behind the podium as a show of “cooperation and support.”

“We have been talking about the past and we need to start focusing on the future,” he said. “We will become the No. 1 tourist destination point in the world. Cause anything you can do on vacation, you can do within three hours of where I am standing right now. Anything. So welcome to the heart of the future.”