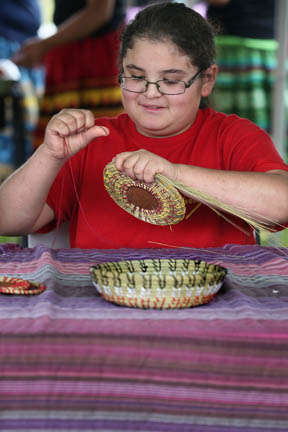 OKEECHOBEE — For Winnie Gopher and other Pemayetv Emahakv Charter School students, the chance to spotlight Seminole culture during Education Day at the annual Battle of Okeechobee reenactment is a matter of pride.

“It’s important to show other kids what we do every day and what our ancestors did in the past,” Winnie said.

On a tiny portion of Okeechobee Battlefield Historic State Park, the Feb. 26 event kicked off this year’s four-day commemoration of the Dec. 25, 1837 clash between Native Americans and the United States Army.

The second bloodiest battle of the Second Seminole War marked a turning point in the fight for freedom. There, at the northeastern tip of Lake Okeechobee, 1,000 soldiers and a few hundred Native Americans fought the last of large-scale battles.

All were treated to glimpses of the past via vendor and education stations that included a sweet shop filled with old-fashioned candy and beverages; a notions tent where beads, buttons, fabric and leather goods were sold; and several tables where Seminole Tribe members cooked pumpkin frybread, whittled knives and fashioned beaded jewelry and sweetgrass baskets.

“They all come to attention and get the bigger picture when the cannon starts to fire,” Gopher said.

The blast of a cannon, though not likely used at the Battle of Okeechobee according to historians, is typically engaged during war reenactments.

PECS history teacher Jade Braswell Osceola said Seminole War education is built into the school curriculum. By the time fourth-graders participate at the Okeechobee battle event they have been equipped with lessons learned in the classroom.

“What’s great about coming to the battlefield is being able to see the curriculum come to life. This is where everything they learn is tied together,” Osceola said. “It’s walking through living history.”

The relevance of PECS children showing kids from other schools how they bead, carve wood, cook frybread and twist sweetgrass into baskets is apparent to other teachers and to Native American children who attend different schools.

“When you look at the battlefield and then look at the children, you know what happened next. The Seminole Tribe is still alive,” said teacher Eileen Nichols, of South Elementary School in Okeechobee.

Gary A. Poe, a history buff with the 8th Florida Company C reenactors, who goes by the stage name “Stumpy,” said no one won the battle on Christmas Day 178 years ago.

Historical accounts indicate that 26 soldiers were killed and 112 injured, but no counts were taken of slain Native Americans. However, Native casualties were estimated to be similar.

“It was never a win or a loss. It was just a terrible battle,” Poe said.

For South Elementary fourth-grader Mya Billie, Education Day was a welcome experience. The only Seminole in her class, Mya said the field trip gave her friends a chance to discover what she learns from daily life through her parents and Tribal elders.

Nichols said Mya helped prepare classmates by sharing some of her Seminole culture. She told them about how her family uses corn to make sofkee and she explained a bit about the history of patchwork clothing.

“I just hope that today helps them better understand what happened to us. It’s a lot more than what you read about in books,” Mya said.