A 16-foot totem pole depicting the orca Tokitae made its way from Bellingham, Washington, to Miami in May, pausing at many stops along the way, including at Big Cypress.

The totem was part of a trek of Lummi Nation tribal leaders, tribal members and their supporters – including some Seminole and Miccosukee – to bring attention to the Lummi’s request that the orca (or killer whale) at the Miami Seaquarium known as Lolita, be returned to the Salish Sea where she was captured decades ago.

Seaquarium officials say Lolita has received excellent care during her years in captivity since 1970, where she performs in shows. In a statement provided to The Seminole Tribune, Eric A. Eimstad, Seaquarium general manager, said Lolita would not be released.

Lummi officials say they have a well thought out plan for Lolita’s return to the Pacific Northwest, so she can live out her remaining years safely and in comfort. “We’re not just going to take her back and dump her in the ocean,” Lummi Councilmember Fred Lane told The Seminole Tribune.

Lane said the Lummi’s have a “retirement plan,” for Lolita, who is close to 50 years old, in concert with The Orca Network and other groups. It is part of a $3.5 million project that includes the rehabilitation and release of the orca to a “sea pen” located in a protective ocean cove, where she would have access to plentiful food and the ability to interact with other orcas, including her remaining family members.

But securing Lolita’s release appears to be anything but certain. Earlier this year, the 11th U.S. Circuit Court of Appeals in Miami rejected claims by the People for the Ethical Treatment of Animals (PETA) and other stakeholders who argued keeping Lolita in captivity violated the federal Endangered Species Act.

“The evidence, construed in the light most favorable to PETA, does not support the conclusion that the conditions of her captivity pose a threat of serious harm to Lolita,” the court said in the ruling.

However, Jared Goodman, the deputy general counsel for animal law at PETA, told the Seminole Tribune that there are still two legal actions pending. One is a request for a rehearing of the ruling from the 11th Circuit in Miami, based on what Goodman said was the court’s failure to “analyze whether the conditions we alleged to be the case were supported.”

The other is a lawsuit against the U.S. Department of Agriculture, attempting to invalidate Seaquarium’s license to house Lolita. Goodman said the license should be revoked under the federal Animal Welfare Act. He said Seaquarium is in violation of the act because Lolita’s tank is too small and she is not adequately protected from the sun, among other issues.

Not surprisingly, Seaquarium officials disagree with PETA’s assertions. “As we have stated repeatedly, it would be reckless and cruel to risk [Lolita’s] life by moving her from her home solely to satisfy the desire of those who do not understand or care that such a move would jeopardize her life and the life of the other killer whales in Puget Sound,” Eimstad’s statement continued.

Lane has said the Lummi have not ruled out bringing their own legal action, and said in the meantime it would continue with its public campaign. Among their supporters in Florida is democratic gubernatorial candidate Philip Levine, who expressed his support for releasing Lolita as recently as last March. 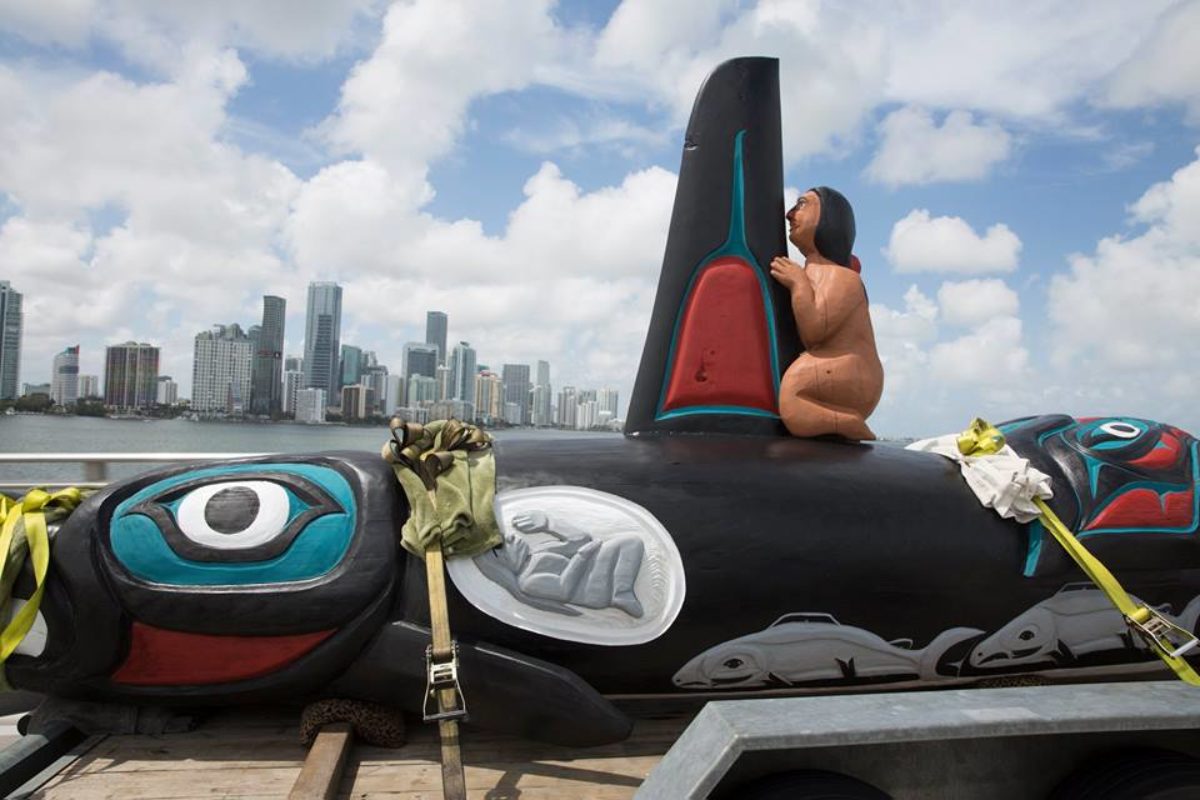 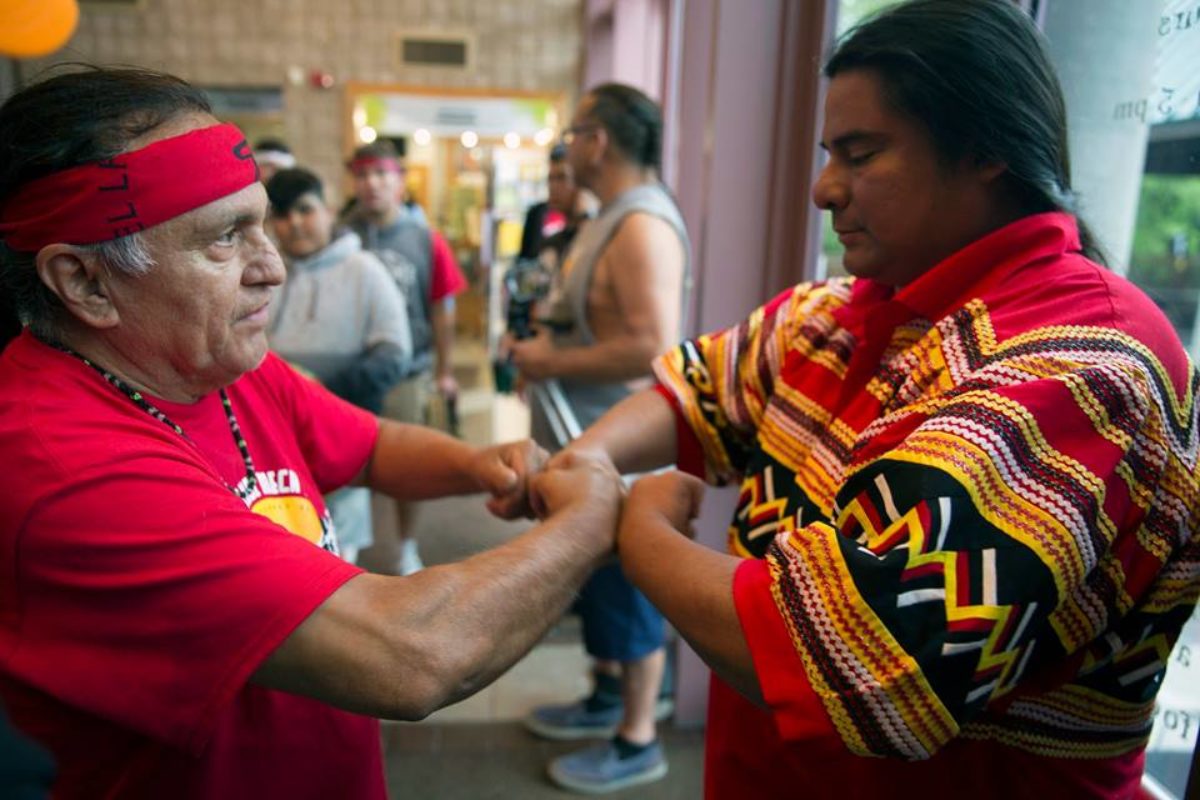 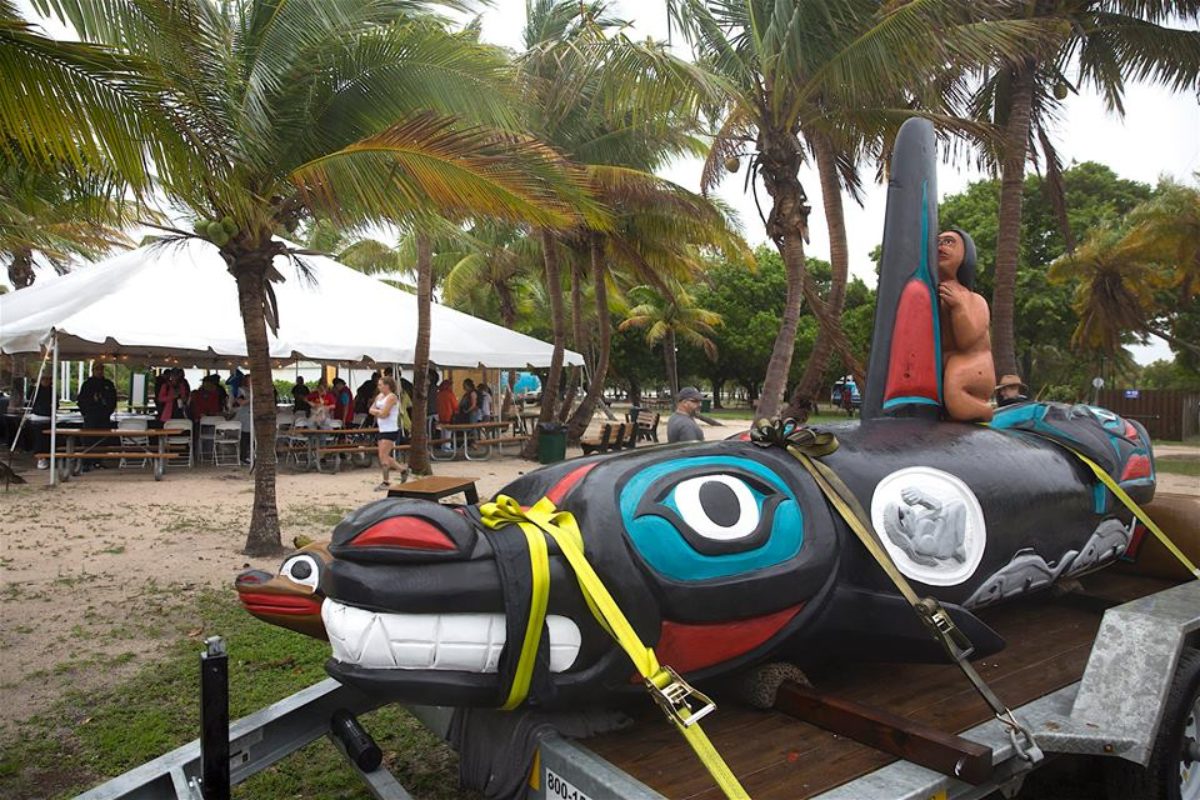 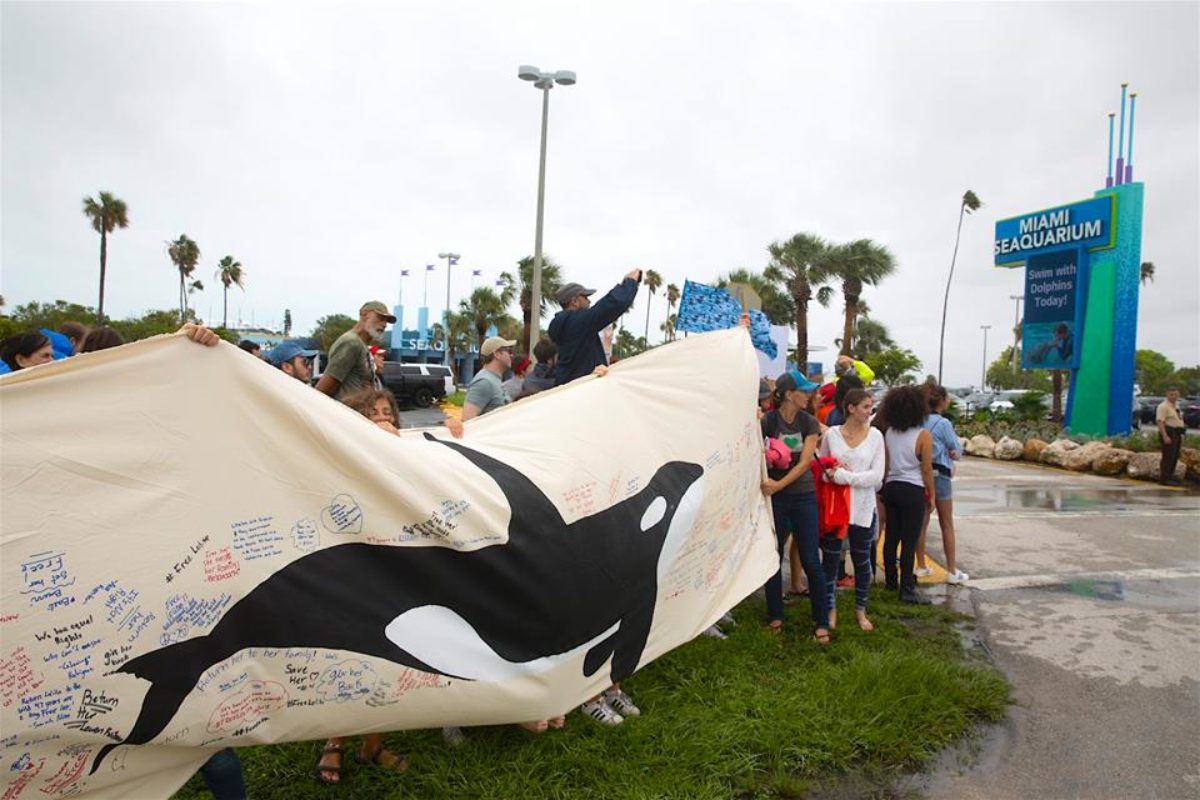 Supporters arrive at the Miami Seaquarium in late May with a canvas featuring messages to Lolita. The Lummi Nation and its supporters went to demand Lolita’s release. (Courtesy Lummi Nation Councilmember Fred Lane) 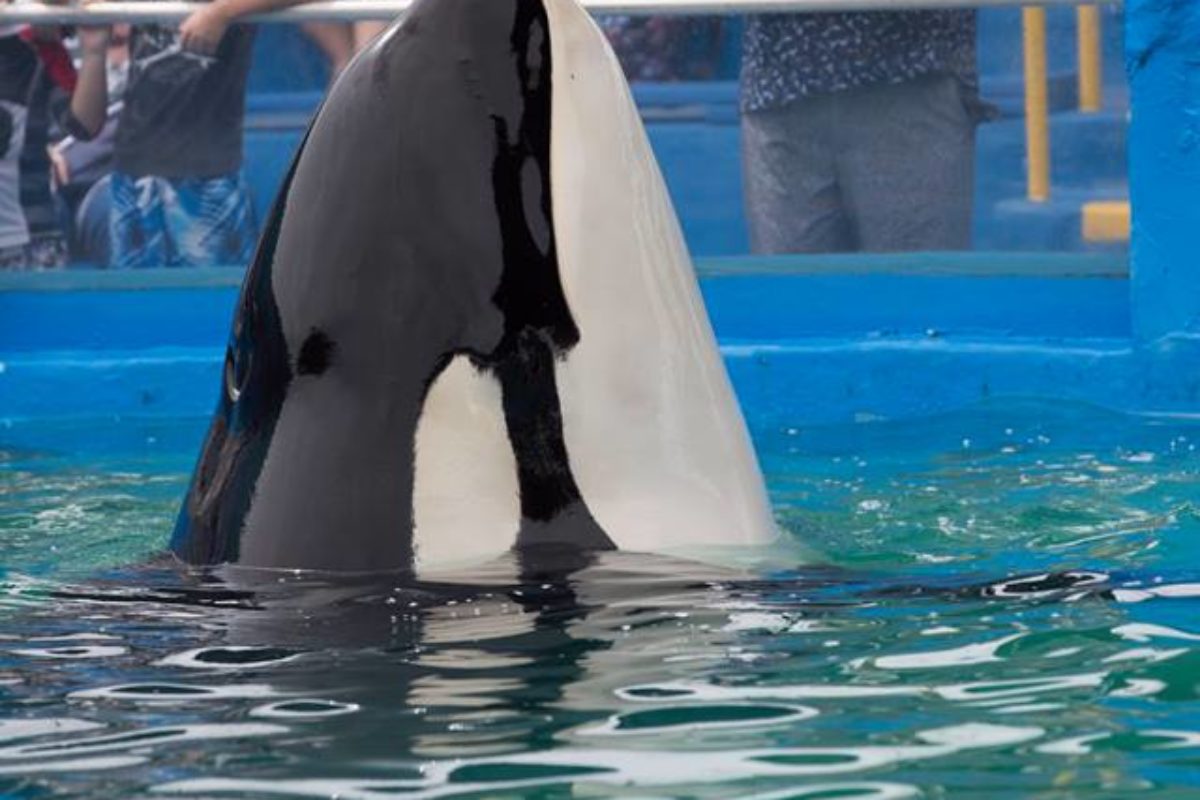 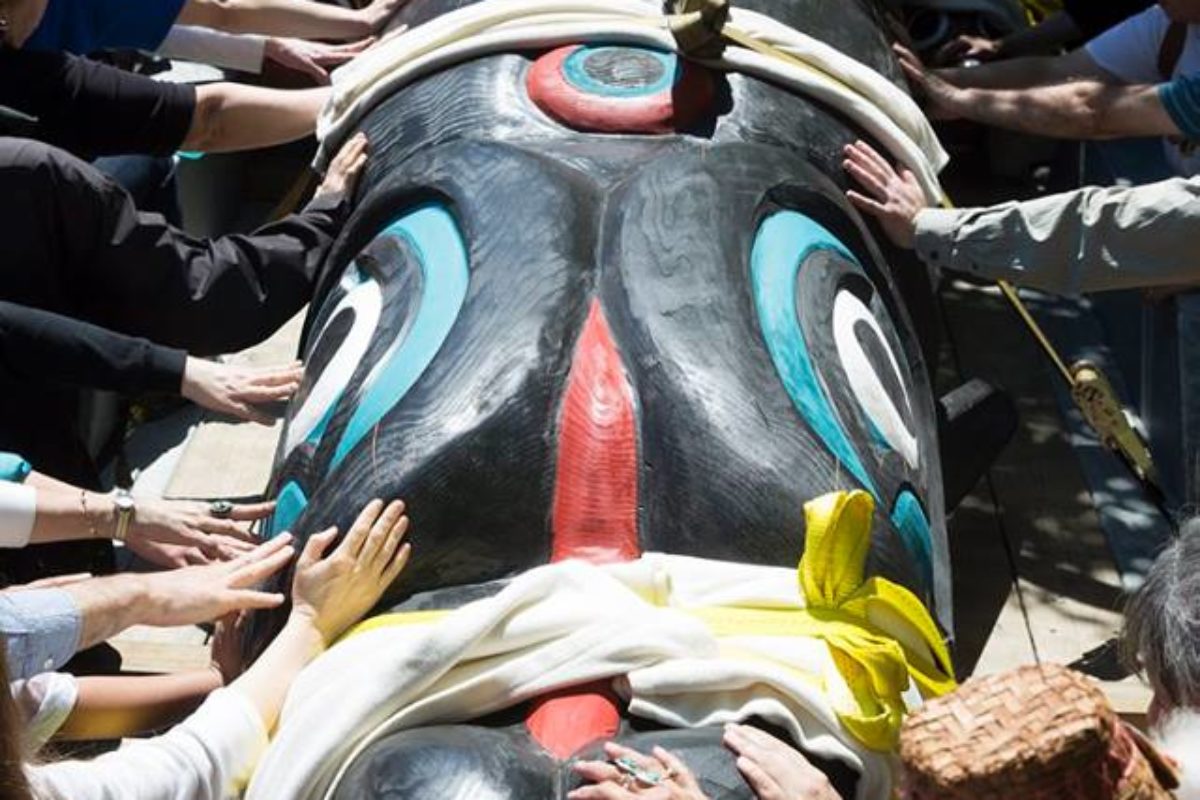 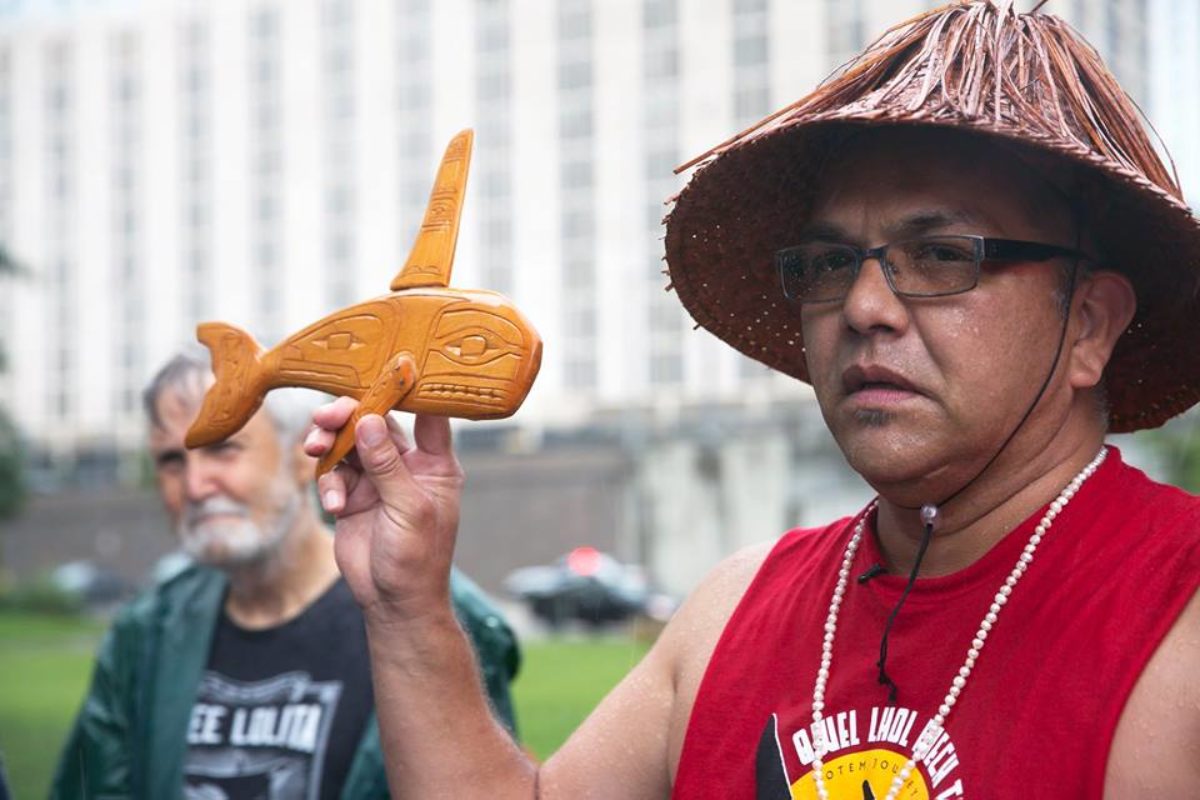 Show must go on?

The public’s enthusiasm for live orca exhibitions – made most famous at SeaWorld locations in the United States – has waned in recent years. Pressure to free orcas in captivity was ramped up significantly in the wake of the 2013 documentary Blackfish, which told the story of the orca Tilikum, who performed at SeaWorld Orlando. The documentary showed the complex and often damaging effects of keeping orcas in captivity.

Tilikum, who died in 2017, was involved in the deaths of two trainers and a trespasser.

SeaWorld decided in 2016 to end its orca breeding programs and phase out live shows. It is thought that the decision was made at least in part because of the fallout from the documentary and continued public pressure from animal rights groups and activists.

Back in Florida, several events marked the arrival of the Lummi totem to Miami last month, which was created and donated by Lummi artist Jewell James.

When the totem made a trip through Big Cypress, it stopped at the Ah-Tah-Thi-Ki Museum, where the group was given a tour. Everett Osceola, cultural ambassador for the Seminole Tribe, was one of the members in attendance showing support for the Lummi.

After gatherings in Miami, the group, which included Seminole and Miccosukee Tribal members, walked together to the outside of the Seaquarium, located at 4400 Rickenbacker Causeway, and stood within earshot of Lolita’s tank. The Lummi Blackhawk Youth Singers spoke to Lolita in their native tongue through song and drumming.

Lane said the group would be back in South Florida in September, and hope to be part of the Art Basel event in Miami Beach this coming December. He said the Leonardo DiCaprio Foundation was helping the group secure a spot for the totem to be displayed at the event.

More information is at sacredsea.org.