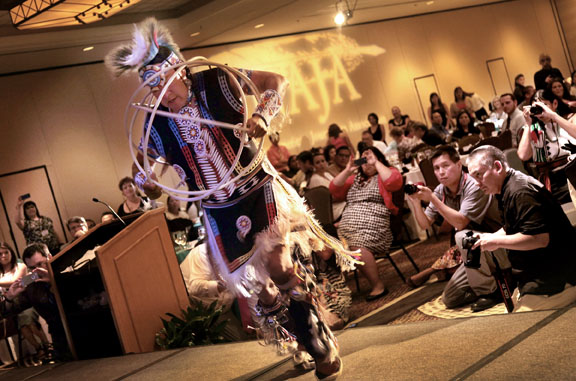 TEMPE, Ariz. — In the spirit of past Sioux eyapaha, village criers who heralded the news of warriors and chiefs, members of the Native American Journalist Association (NAJA) gathered to share the latest about Native issues, media technology and ways to advance communication throughout Indian Country.

“We are blessed with special gifts to tell our stories whether it is through writing, videography, radio or television. Yes, the Creator blessed us to use the gifts to help people – our people,” said Tom Arviso, CEO and Publisher of Navajo Times, the largest independent Native newspaper in the United States.

Attended by 205 NAJA members from Canada, the U.S. and Australia at the Tempe Mission Palms Hotel, the July 18-21 conference featured nearly 30 workshops geared to support and strengthen journalism. Classes and lectures included a National Public Radio discussion about audio storytelling; a class in accessing facts and figures through the Freedom of Information Act;  and a half-day course about using smart phones to produce news articles, photos and videos.

NAJA Membership and Communications manager Rebecca Landsberry said the 30-year organization grew by 17 journalists in the weeks before the event. She credited the sudden hike to the membership of first-time NAJA convention participants from Native Public Media, a national radio broadcast service dedicated to the advancement of all forms of media that serve sovereign Tribes.

Awards were given at the 29th annual event for exceptional work in newspaper and broadcast journalism during 2012.

The story reported a series of charity collections led by Tribal members determined to bring holiday cheer to poor families on the Pine Ridge Reservation in South Dakota. The report could have ended there, but Bidney included heartbreaking facts to show the inhumane poverty that exists year-round on Pine Ridge.

Bidney revealed, among other sad truths, that unemployment on the reservation averages 83 percent; infant mortality is the highest in the United States and life expectancy is only 48 years for men and 52 years for women  – the lowest in the Western Hemisphere second only to Haiti.

“The kids up there don’t often have shoes without holes in them,” Native Relief Foundation member Jody Osceola said in the story. “This is poverty I don’t think anyone in the Seminole Tribe can even grasp.”

Tribal members created the foundation in 2011 after seeing an ABC News documentary about Pine Ridge.

Deborah Parker, vice chairwoman of the Tulalip Tribes Board of Directors in Washington state, said Tribal leaders should embrace the media. She is the face and voice behind sweeping changes this year in the Violence Against Women Reauthorization Act.

Parker, who fought two years for changes in the law that allows Tribal government to prosecute offenders, including non-natives, of crimes against Native women and children, credited the media for keeping the issue alive.

Eighty-eight percent of crimes against Native American women are perpetrated by non-native men, she said, but justice is rare.

Newspapers and television stations seized the story when Parker came out with her own personal story of abuse while Congress and the Senate bickered along party lines. She used the momentum to keep the fight moving forward.

President Obama signed the law in March. Tribes have until 2015 to prepare for implementation through the Justice Department.

Harnessing the power of the media compelled Tim Giago, publisher of the first independent Native paper, the Lakota Times, and author Adrian C. Louis to call 30 Native American journalists for a meeting in 1983 at Pennsylvania State University. Though Native newspapers had existed since The Cherokee Phoenix became the nation’s first bilingual paper in 1828, Giago was concerned that recent historic events such as Wounded Knee and the termination of 109 recognized Tribes had gone unreported by the mainstream press.

“No one was telling our story but us. We needed to find our own Walter Cronkite,” Giago said.

In 1984, the Native American Press Association (now NAJA) was established with Giago as the first president. In his quest for the truth and the freedom to tell it, Giago has been shot at and has seen his offices firebombed.

“Getting the news out is imminent to the future of our people. I’m not the most popular guy in the world, but I always tell the truth,” Giago said.

Arviso, a strong proponent of  the First Amendment and for the media’s government watchdog role,  called Native journalism a “special” responsibility.

“We take into consideration our traditions, our language and we always respect our elders,” he said. “There are some things we don’t talk about, but when we do tell our stories, it is always dynamic.”