Skip to content
You are here
Home > Community > Native Americans emphasize the need to vote in U.S. elections 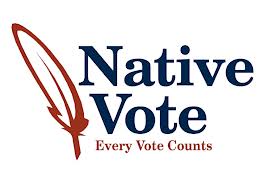 All U.S. citizens ages 18 and older have the right, privilege and responsibility to vote. For this upcoming U.S. presidential election, many Native Americans are emphasizing thatthe right should not be taken lightly in Indian Country, as it was not easily granted.

The Indian Citizenship Act of 1924 extended citizenship rights to all American Indians and Alaska Natives, but it took until the Voting Rights Act was amended in 1970 to remove a major obstacle to allow the vote for all Native Americans.

Since its inception in 1944, the National Congress of American Indians (NCAI) has worked to ensure that nobody thwarts the right to vote. For about 20 years, NCAI has initiated the nonpartisan Native Vote campaign to get out the vote, to prevent voter disenfranchisement, to educate Tribal members about candidates and ballot measures, and to share data resources that provide Tribal leaders with a deeper understanding of voter participation within Indian Country.

“Our first resolution in 1944 was to protect the right to vote,” said Thom Wallace, NCAI communications director. “Every election year we help get out the vote. This year we are focused on registering voters first and foremost. The impact of the Native American vote varies from state to state and county to county, which is why it is so important.”

Native Americans can vote in Tribal elections, as well as local, state and federal elections, making their right to vote unique. Although the influence of the Native vote is unknown, many believe it is critically important.

“I think if anywhere, Florida understands that,” Wallace said. “Tribal members know if there is a candidate who supports their issues, it can change history.”

Statistics give a clear picture of Native voting. In the 2008 election, at least one million Native Americans did not register to vote; that’s 34 percent of those who were eligible. Native Americans don’t always vote as a block, but the group has gained more influence.

NCAI cites two recent elections determined, in part, by a large Native vote. In 2006, U.S. Sen. Jon Tester (D-Montana) won his seat over the incumbent by only 3,562 votes. In that election, more than 17,000 voters cast ballots on Montana’s seven reservations. Tester’s election shifted the balance of power in the Senate.

Also, Sen. Lisa Murkowski (R-Alaska) credits her victory in the 2010 midterm election to the power of the Native vote. Murkowski – only the second successful write-in candidate in U.S. Senate history – won the general election by more than 10,000 write-in votes.

“Indians don’t just vote ‘D’ for democrat or ‘R’ for republican,” NCAI president Jefferson Keel said. “For us, it’s ‘I’ for Indian. We are independent voters, and we will continue to vote for the candidate who is strong on our issues and cares about our priorities.”

The deadline to register for the November election is Oct. 9. People can register in person at any Broward County library or Department of Motor Vehicles office or by visiting www.browardsoe.org or by calling 954-357-7050 for more information.