Skip to content
You are here
Home > Education > Graduates shed joyful tears as they close one door, open others 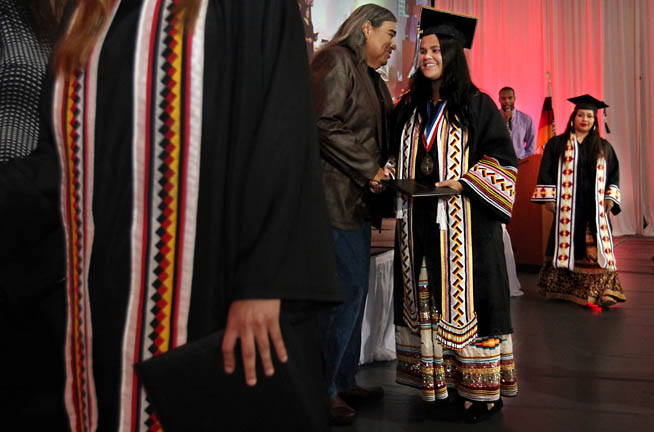 BIG CYPRESS — Ahfachkee School graduates may have received the best advice of their high school careers on the very last day.

“Don’t let this be the last time you graduate,” said Education Department director Santarvis Brown to five graduates during commencement ceremonies May 30.

Dressed in mortarboard caps, academic gowns and intricately designed patchwork sashes at the Herman L. Osceola Gymnasium, the teenagers were as much celebrating an end as they were heralding new beginnings.

Graduates Malari Baker, Sarah Osceola, Gianna Wargolet, Quenton Cypress and Savannah Tiger will head to college or technical vocational schools after summer vacation. Like most teens, each experienced moments of doubt that could have led to academic disaster, but all faced the uncertainty and achieved success.

Salutatorian Sarah Osceola, who plans to attend Immokalee Technical Center, said she felt like quitting school several times, but as she matured, she shifted from feeling fearful to taking charge.

“One should always strive to be a leader, not a follower,” Osceola said. “I had to put in the effort to reach the end of the finish line.”

Ahfachkee teacher Jarrid Smith, a former college athlete who holds master’s degrees in political science and communications, delivered the commencement address. The two-syllable gist of his message that every grad understood: YOLO.

“You only live once,” Smith said.

But Smith provided more than a four-letter acronym. He reminded teens of the recent sudden passing of beloved Big Cypress Recreation basketball coach Al McGriff. No longer would they see McGriff’s persistent and contagious toothy smile or listen to his grandfatherly guidance that made players give their best shot. McGriff was vigilant about keeping children safe and busily occupied in healthy activities. He was more than an hourly employee, Smith said. McGriff’s life was rich in value and purpose.

“Learning about Mr. Al’s passing was hard. Every time I saw him, he greeted me with a smile. It’s obvious to us that we only live once, but let’s not let someone special pass away before we realize that,” Smith said. “Always remember that your lives have purpose every day.”

He told the teens that the “discomfort of responsibility is God-given” – a vehicle used by the Creator to drive purpose. Smith urged the grads to allow love, faith and kindness to guide them, warned them against complacency and challenged them to maximize their potential.

And Smith warned them of the unemployment rate – another reason to go on to higher education through the Tribe’s post-graduation program led by Brown.

Valedictorian Savannah Tiger said she plans to continue school and become a hair stylist like her mother, Cara Tiger, who owns a hair salon in Clewiston. Savannah Tiger, who had been in a car wreck during the previous year, said facing her own immortality gave her the courage to turn her once careless attitude about school into a mission.

“I didn’t think I’d make it here. I thought no, I won’t graduate. Now, wow, I can’t believe I’m not only here, but I’m the valedictorian,” she said.

But the perseverance award went to Malari Baker, who despite becoming a mother in the 10th grade, managed to juggle child care, a full course load and a spot on the school’s championship basketball team. She is already planning to move with her son into their own home in Broward where she will attend cosmetology school.

Quenton Cypress thanked his father and role model, Cicero Osceola, for keeping him on the right track and providing him with high standards for achievement that sometimes seemed daunting but are now every inch possible.

He also credited all Ahfachkee School staff, and then named a few.

“Thanks to [former principal] Ms. [Lucy] Dafoe for making us see we could do more than imagined … and to the guidance counselor [Clemencia Urbank] for telling us everything we needed to know to graduate – even when we did not want to hear it,” Cypress said.