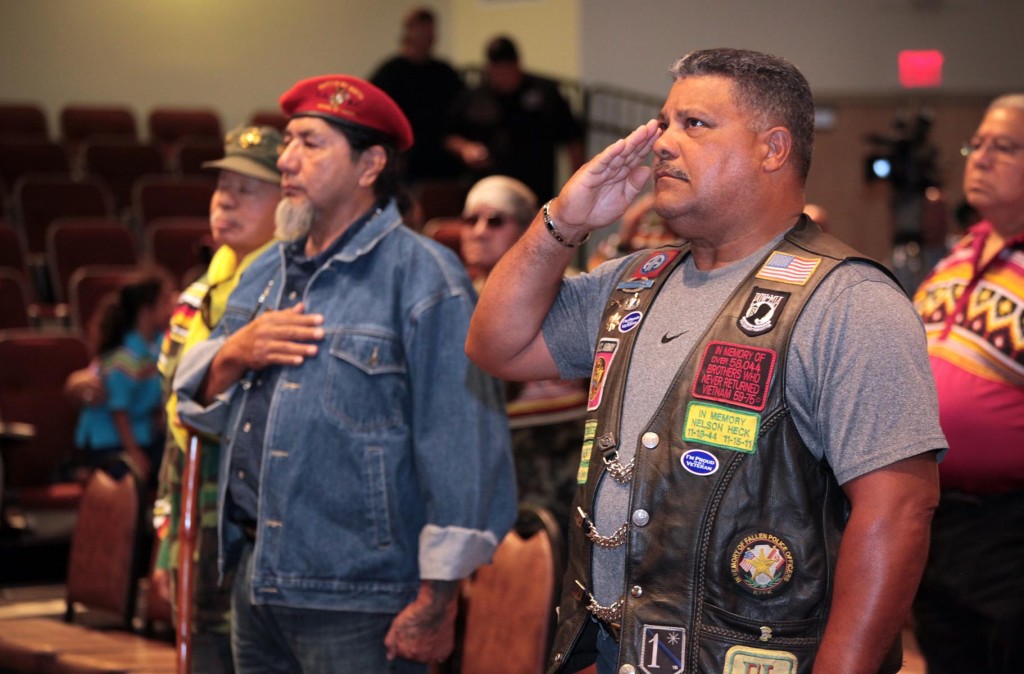 BRIGHTON — Emotions brimmed Nov. 7 during the Seminole Veterans Day event in Brighton as Tribal members and guests paid homage to those who served their country.

One by one, dignitaries thanked the veterans, expressing their gratitude to those, past and present, who protect the nation’s freedom.

“Several of us served and experienced the heartache of being away from home,” said Stephen Bowers, master of ceremonies. “We’re all back and that’s why we have this event every year – so people know Florida Seminoles served in all branches of the military.”

Since World War II, 72 Tribal members have served in the military. Twenty-four have passed on, but all were honored at the ceremony.

Tribal member and U.S. Army Staff Sgt. Gabriel Coppedge, who served in Afghanistan and Iraq from 2006-2008 and continues to serve in the Army Reserve infantry, was the guest speaker. He joined the army in 2004.

“That’s where I first learned about brotherhood,” said Coppedge, who served in the Alpha Company 2nd Battalion, 30th Infantry. “You learned things about people and shared your hopes, dreams and aspirations; everything that brought you to this point in your life. We relied on and trusted each other unquestionably.”

After his tour in Afghanistan, Coppedge thought he would go home but instead was sent to Iraq as part of the stop-loss policy, or the involuntary extension of a service member’s active duty service. He said it was one of the best things to happen to him.

“I could have come home earlier, but I stayed because I had soldiers who were going there,” said Coppedge, who was responsible for nine soldiers at the time. “I wanted to go lead them. I felt it was selfish to go home and start my life; it would have been wrong of me to go home.”

He and his soldiers served together in Afghanistan and Iraq for three and a half years. Although most of his group survived the perils of war, one was killed by a suicide bomber.

“I was happy to be able to contribute to those who made it home; we brought each other home,” he said. “But PTSD (post-traumatic stress disorder) took some guys.”

Currently a student at University of Phoenix, Coppedge plans to become a psychologist so he can help veterans cope with their struggles.

“Family members are the ones who are left out and don’t understand, but they are an integral part of the recovery process,” he said. “I want to bring assistance to those guys.”

Staff Sgt. Coppedge, a member of the Seminole and Pima Indians of Gila River Tribes, grew up and lives in Arizona with his children, but he spent summers in Big Cypress with his father, Gene Coppedge.

Aiyana quoted a popular credo from the Vietnam War era to describe what soldiers must do: “We, the unwilling, led by the unknowing, are doing the impossible for the ungrateful.”

“Today we need to encourage the younger generation to join the military,” said veteran Mitchell Cypress. “We all enjoy our freedom; they need to go out and see what the military is all about. Freedom is earned, not given to us. We need to protect that.”

Tributes were made to Harley Jumper, who served in the National Guard, U.S. Army and U.S. Marines, and to Timmy Johns, who served in the U.S. Army. A roll call of Seminole veterans, alive and deceased, ensued, followed by a moving rendition of Taps that ended the ceremony.