Skip to content
You are here
Home > Health > Losing weight and gaining perspective: Lessons I learned 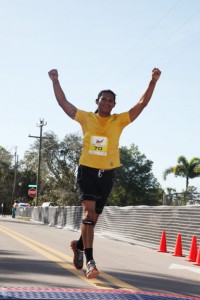 In December 2007 I weighed 300 pounds, roughly the size of three sixth-graders. I’m tall – 6 feet, 2 3/4 inches, but I round up to 6 feet, 3 inches if anyone asks – so my body frame held the weight well. I’d just completed my senior year at Florida Atlantic University (FAU), leaving with a bachelor’s degree and memories of playing football.

It was during that 2007 football season at FAU that I was struck with Bell’s palsy, a neurological virus that paralyzes muscles in the face. I went to sleep two nights before a game with a strange sensation on my tongue, and when I awoke I’d lost control of the left side of my face. I met with our team doctor the next day, described my symptoms, and the first words out of his mouth were “Bell’s palsy.”

The doctor informed me that there was no cure for the virus, no pill to take or fluid to ingest. He told me the virus had to run its course and eventually, after a month or two, I would begin to regain control of my face. After doing my own research, I also learned, grimly, that some Bell’s palsy victims never fully regain total control of their facial muscles.

I played in that game the day after learning I had Bell’s palsy. Our team equipment manager outfitted my helmet with a protective eye visor because I couldn’t close my left eye completely. That game was a surreal experience; I distinctly recall colliding with an opposing player and, whereas normally my eyes would close involuntarily before contact, now I saw it all through my left eye. The initial effects of Bell’s palsy didn’t stop me from playing, and I thought this virus wouldn’t be a big thing. I was wrong.

In the days that followed my diagnosis, I started to experience and understand the long-term psychological effects of the virus. Because I couldn’t control the muscles in my face, smiling, frowning and even spitting became impossible. I wasn’t able to show any emotion, and this fact quickly ate away my self-image. I shunned simple enjoyments, like watching a funny TV show or chewing gum, for fear that people would see something was wrong with me.

The ancient Roman philosopher Cicero wrote, “The face is a picture of the mind…” If you were to see me when I had Bell’s palsy, then you would have thought I didn’t have a thing on my mind. However, that couldn’t be further from the truth. The truth was that I was in pain from not being able to show any emotion.

A little more than a month after the paralysis began, feeling began to return to my face and I slowly regained control. Although the virus only affected me physically for a short time, the true change went on in my head. The experience was traumatic. Imagine fearing that you would never be able to smile again, and you’ll begin to know what I felt.

Prior to the virus, I didn’t place too much emphasis on my long-term outlook on life. I was 22 years old at the time, and I lived like it, focused on the present. I most often ate the foods that tasted best. They were full of fried flavor and came through a drive-through window. I played football. I exercised and lifted weights four to five days a week.

When the virus’ effects began to fade and my smile started to return, I made myself a promise – to make sure I did as much as I could of whatever made me smile.

Bell’s palsy was a blessing to me. It served as an attitude adjuster and provided me with a catalyst to make several lifelong changes.

The most important things to me are my love for God, my commitment to family and my sacrifice for the community – these are the things that make me smile the most. I realized that for me to fulfill my promise and to have the greatest positive impact on the things I care about the most, I would have to be present. Continuing the lifestyle that I held in 2007 would no doubt have resulted in numerous health illnesses through the years, diminishing my ability to live life to the fullest.

To make any changes in your life, whether it’s for health, financial or personal reasons, there first has to be a shift in the way you see things. Do you value faith? Is family central to your life? What is your place in our community? Don’t worry if you don’t have an immediate answer for these questions, but do consider them. Also consider, what do you do to live those values?

I now weigh 206 pounds, so I like to tell people I’ve lost the weight of a whole sixth-grader. Yes, I exercise. Yes, I attempt to always make nutritious food choices. Yes, I’ll find myself eating cookies every once in a while.

What helps me persevere, what maintains my determination, what has gotten me to the point I’m at weight and health wise, is the promise I made all those years ago. Don’t wait for Bell’s palsy. Allow my story to be a catalyst to make changes in your life.