Skip to content
You are here
Home > Education > Lorelei goes to Washington, D.C. 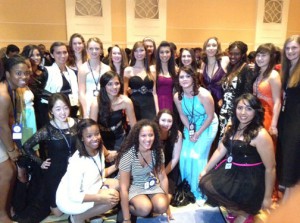 And when Lorelei Tommie, 18, was asked about her five-day experience from Jan. 19-23, she uttered a teenage superlative: “It was the coolest thing ever.”

Tommie, a senior at American Heritage School, was part of the throng of people who packed the National Mall for a chance to witness the historic event.

“From the first minute we arrived I could feel the energy,” Tommie said. “When the choir sung ‘The Battle Hymn of the Republic,’ we all were so excited and pumped. And then to hear the president speak? Yes, it was the coolest thing ever.”

It was freezing cold, she was too far from the stage to see with her eyes when Obama took the oath of office for a second term, but Tommie could see the Capitol steps where the first family stood, and thanks to a huge video screen that projected the unfolding moment in history, she felt immense excitement.

“On Martin Luther King Jr. Day, I was there for the second inauguration of the first black president of the United States,” Tommie said.

Conference students were allowed access to a special viewing area to watch the president and first family make their way down Pennsylvania Avenue.

An academic overachiever, she attended the National Young Leaders Conference in D.C. two years ago. The program gives outstanding sophomores, juniors and seniors a close look at democracy at work through men and women who rank high among the movers and shakers in business and government.

Days were filled with workshops and activities that taught students about the presidency. Topics included presidential campaign strategies, the role of the president, exploring the Cabinet and taking action in home communities.

“We know what presidents go through to get elected, what the president can do and can’t do in office, and how he can try to influence those who vote on the issues,” Tommie said. “I also learned why presidents go gray so quickly. They have so much responsibility that it’s ridiculous.”

Nights were spent getting educationally entertained.

Students were treated to the comedic satire of the Capitol Steps, a group of Washington-based congressional staffers turned songwriters; a screening of the movie All the President’s Men, which was followed by a panel discussion; and a formal black tie gala at the National Air and Space Museum.

“There was not a minute of boredom,” Tommie said. “We learned constantly and it was always fun.”

The inauguration marked her eighth visit to the nation’s capital, but Tommie has no political aspirations. She plans to study natural horsemanship at the University of Montana Western.

“There is no way I’d ever want to be the president, but when it comes time to vote, I will be prepared because I understand what the president does,” Tommie said. “I will be able to pick a candidate I know will do the best job.”