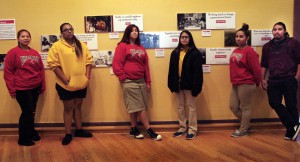 BIG CYPRESS — A teacher’s desire to use visual aids in the classroom has evolved into an awe-inspiring student art project.

“There was no intention of becoming big,” said Jarrid Smith, Ahfachkee School’s Seminole Government and Leadership teacher. “When it all began, I told the students that I had no way of knowing where it would go.”

Weeks later, the project derived from Pass it on Billboards at Values.com is now the art exhibit “Values Billboards” showing though March 29 at the Ah-Tah-Thi-Ki Museum.

Eight 10-by-36-inch boards, designed one each by eight 10th- and 11th-graders, fill the Mosaic Gallery wall. The left of every “billboard” contains a historic Seminole photograph chosen by the student, while the other side has a life value held dear by the student. Above, a caption hammers the value home with a bold, in-your-face statement.

Kaylan Osceola, 16, illustrated “Loyalty” in words and used a loving image of her mother and uncle when they were young children. “Eeyaatalle, you protect them through good and bad because they would do the same for you,” read the caption.

“Unity,” by Colby Herrera, 17, is depicted with a mid-1950s photograph of the Tribe’s charter committee, which was responsible for the Tribe’s eventual recognition in 1957. Herrera’s caption: “Together we can do anything.”

For some of the teens, the classroom exercise became a way to discover more about themselves.

“In the 1950s it took eight men to come together and change the future,” Herrera said. “I never really liked working on projects with other people, but I found out that when we work together, we can get more done.”

Malari Baker, 17, gained a greater respect for her value “Perseverance” by seeing herself in a photo of her great-grandmother Mary Cypress cradling her great-uncle Mitchell Cypress during the Seminole transition.

“My family did not have much during that time but no matter what, my great-grandmother always took care of the family,” Baker said. “Perseverance means to keep going in spite of the obstacles or hard times that come your way.”

Quenton Cypress, 17, described “True Beauty” with an aerial photograph of the Big Cypress Reservation long before paved streets and modern buildings. Some might view the photo and see remote isolation. Cypress sees beauty.

“People who have not lived the life (on the reservation) can see it as empty and boring, but I see it as our home,” he said. “It is where we come from and what I want to keep alive.”

Kaitlin Osceola, 15, focused on “Hard Work,” a quality she learned from her father, Raleigh Osceola, who instilled in her the importance of education, while Savannah Tiger, 16, highlighted “Devotion” by giving credit to her mother, Cara Tiger: “My rock – from the swamp to the big city.”

The photographs were gleaned from the Museum’s archive library, said Elizabeth Lowman, the Museum’s oral history educator. Students learned to use technology to cull the archives for photos that spoke to them about the morals and values that shape their lives.

“We were so impressed when we saw the finished product that we had to have it for the Museum,” Lowman said.

Kaitlin Osceola said the teens daydreamed about seeing their billboard art reproduced in full billboard size and placed along highways like I-95 and I-75. Jumper, who had his own show at the Museum during the summer of 2012, said the idea is not far-fetched.

“In the Renaissance we had paintings that influenced society; now we use words, images and technology to educate and enlighten,” he said. “We should have one or two of these billboards on every reservation.”