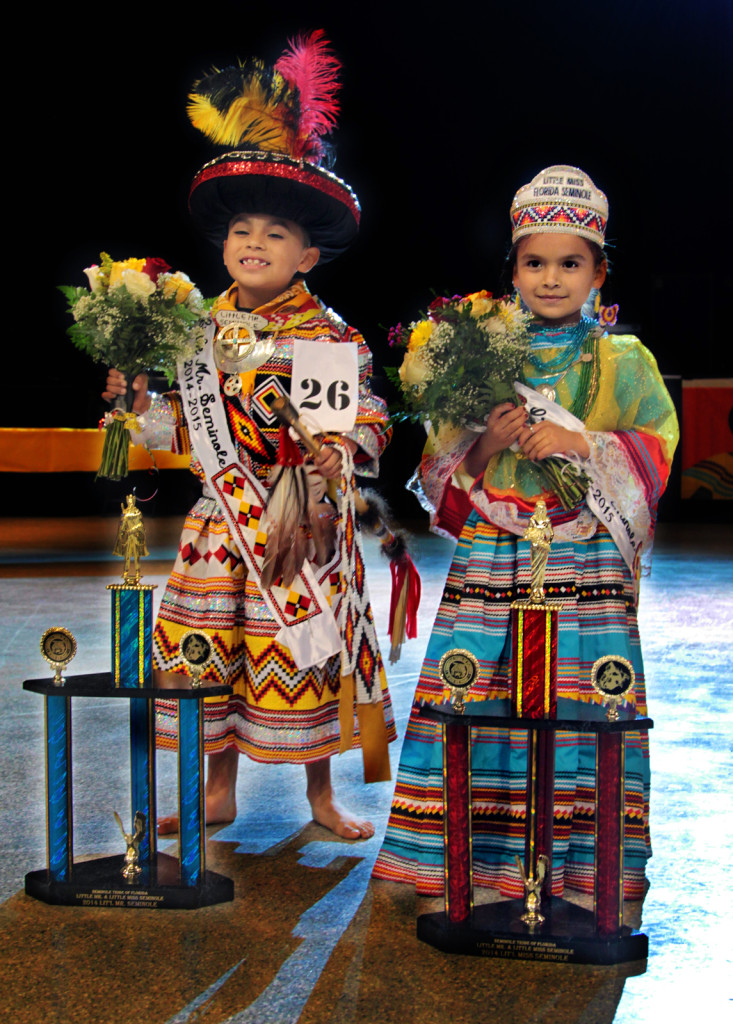 HOLLYWOOD — Charisma, culture and cuteness abounded at Hard Rock Live Feb. 7 when 31 girls and 10 boys graced the stage in full Seminole garb to vie for the Little Mr. and Miss Seminole titles.

“It’s great to have all this support encouraging this kind of participation because it’s really great to start young,” said Miss Seminole Tia Blais-Billie in her welcome speech to the crowd of about 200 proud parents, family members and friends. “I know all these contestants will go on to great things.”

To kick off the pageant, Tia led the 5- to 7-year-old girls in a circle around the stage for both the judges and the audience to get a good look at them. Jr. Miss Seminole Brianna Blais-Billie led the boys. Contestants donned traditional hats and hairstyles, held props such as dolls, stickball sticks and hatchets, and accessorized with beautiful beads and jewelry to wow the judges.

New this year was the prominent participation of the 2013-2014 Little Mr. and Miss Seminole in the pageant.

Choviahoya Weimann and Sarafina Billie both gave welcome speeches at the beginning of the event and farewell speech at the end, escorted each contestant on stage to answer a question from the Seminole princesses and presented the awards to the winners.

Both Roberto and Madasyn proved their Little Mr. and Miss Seminole qualities with their genuine charm and clear responses to their questions. In complete sentences, Roberto said his favorite sport to play is soccer, while Madasyn confidently told the judges her favorite food is frybread.

Princess Committee Chairwoman Wanda Bowers said she is especially sad to let Sarafina go, as she has been a great representative of the Tribe with her excellent speaking skills.

“I’ll be back for Jr. Miss and Miss,” Sarafina said, with a laughing response from the crowd.

“I had fun being Little Mr. (Seminole). I hope the next kid has fun,” Choviahoya added.

The Little Miss Seminole pageant started in 1985, with Wendi Snow as the first to be crowned. Later, the Little Mr. Seminole contest was added to the pageant.

With near life-size trophies in front of them, flowers in hand and sashes emblazoning their new titles – and a crown for Madasyn – the royal twosome were all smiles.