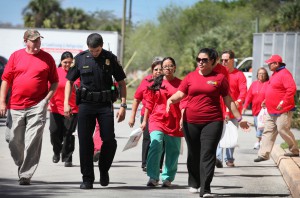 “It’s perfect. It gets your blood flowing and burns calories. Midday is the best time to move and stay healthy,” said Brian Billie at the Feb. 19 Big Cypress Heart Health Awareness Walk.

Health educator Sarah Pinto, who led the fourth annual walk, said the 0.20-mile trek around the Frank Billie Field Office – or 1 mile for walkers who circled the building five times – was staged to get people pumped against the No. 1 cause of death in Indian Country.

It’s true, according to the American Heart Association’s (AHA) 2013 heart health update. Like all races, cardiovascular and coronary disease is the leading killer among Native men and women.

In 2009 alone, the year of the most recent count, 1,813 Native deaths were caused by heart disease, the AHA report said – and that by virtue of race population percentages, represents a rate higher than other races.

The Office of Minority Health (OMH) confirmed that Native Americans and Alaska Natives, on average, are more likely to be diagnosed with heart disease than whites.

Diabetes, the leading cause of myriad health issues throughout the Seminole Tribe, is both a major contributor and a consequence of heart disease, said Edna McDuffie, the Health Department’s outreach coordinator. Most often, the two diseases go hand in hand no matter which came first.

“Every family has someone in it who has diabetes and that frequently leads to complications like heart disease,” McDuffie said.

“That’s why we have the heart walk. We educate.”

Billie, who has diabetes, said he already walks purposely at least four times a week, rides a bicycle instead of a car often around the reservation and does frequent yard work – for himself and neighbors – just to stay fit and keep heart disease away.

“It’s the right thing to do. Gotta keep that (blood sugar) number down,” he said.

Do you think you have what it takes to win prizes and bragging rights in the Big Cypress Health Department’s seven-week Sun-sational Steps Pedometer Contest?

Register and receive a pedometer by March 3. Senior and adult competitors will walk at noon every Tuesday and Thursday beginning March 10.