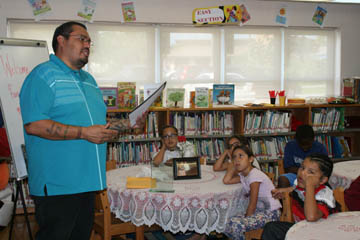 BRIGHTON — The late Lorene Bowers Gopher was honored and remembered April 8 at the Billy Osceola Memorial Library in Brighton.

As part of the library’s women’s history month program, Lorene’s son Lewis Gopher spoke to youth about his mother’s life, accomplishments and dreams for the Seminole Tribe.

“She always wanted the traditional way to be carried on,” Lewis said. “She wanted to spread her knowledge.”

He told youth that his mother did everything possible to attend school and get an education – even if that meant completing her homework by the light of a lantern.

“She had a drive inside of her,” Lewis said.

He stressed to the kids that his mother accomplished much for the Tribe, including helping start the Ah-Tah-Thi-Ki Museum, Pull Out Program and Creek language classes.

“She helped create the Florida Creek dictionary,” he said. “She always wanted the language preserved, how she learned, how her grandma taught her.”

Many of the kids shared experiences they had with Lorene.

Lewis concluded his presentation with a short video that was made in honor of Lorene for posthumously receiving the Florida Folk Heritage award in March. With pride, he displayed the award he and his family accepted on her behalf.

“She never wanted to earn an award,” Lewis said about his mother. “Her goal was to teach the kids, to be a good person, and that makes me want to do more and to be a better person.”