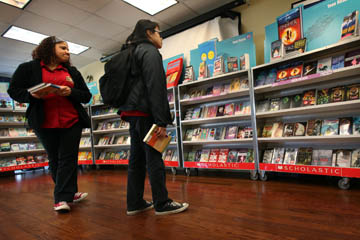 BIG CYPRESS — For Elisah Billie, hanging out at the Ahfachkee School book fair was the next best thing to visiting a bookstore.

“It’s like having Books-A-Million come to my own school,” Elisah said.

Staged in half the school’s cafeteria, with teen novels by James Patterson, John Green and Suzanne Collins at his fingertips, the book fair was a literary buffet for the ninth-grade avid reader.

Walls were lined in packed bookshelves, three tables overflowed with books stacked three and four high, boxes filled with posters capped aisles and a glut of writing and reading accessories fed the impulse buyer’s urge near the cash register. Everything was had at bargain prices – buy one get one free.

“I’m pretty sure that not every kid appreciates the book fair, but there are a lot of us who can spend the whole day here,” Elisah said. “For me, reading is more fun that watching television.”

Third-grader Jody Cabral turned out for his second day of book fair shopping.

“Awesome,” Jody said several times as he perused a plethora of pens, erasers, pencils, stickers, bookmarks and writing pads. With two erasers that looked like mini cellphones in one hand, Jody used the other to give a dollar to cashier and instructional aide Margarita Lugo. He counted back his own change and then put his receipt in his pocket.

“I’ll be back to spend more money tomorrow,” Jody promised.

“Basically, we’re offering the newest books at the best deals to show appreciation to the community. Anyone can come and buy,” Lugo said.

From preschool to 12th grade, students filed into the cafeteria. Teachers, school staff, members of the community and employees were welcomed to shop. Prices were set from 50 cents for a pencil to $59.99 for a Junie B. Jones 27-book collection.

Elisah summed up the book fair as being “pretty cool.”