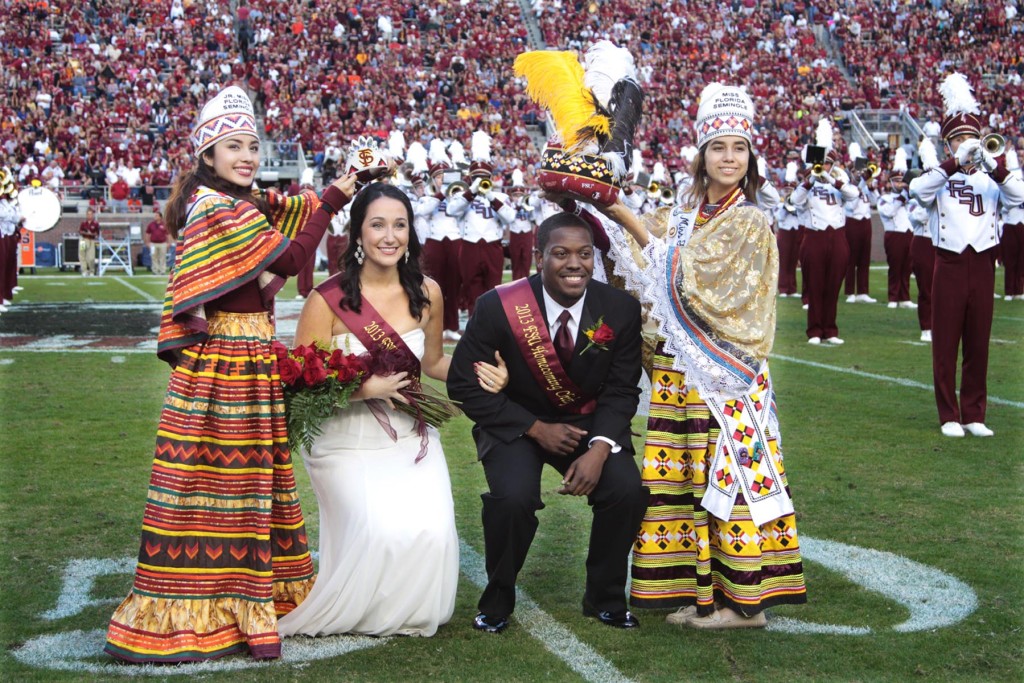 “The school has so much spirit,” said Jr. Miss Seminole Brianna Blais-Billie. “You can feel it when you walk into a room.”

Brianna and her sister Miss Seminole Tia Blais-Billie attended FSU Homecoming to represent the Seminole Tribe and to contribute to another decades-old tradition: crowning the FSU Homecoming chief and princess.

The tradition began in 1976 when Gloria Wilson crowned the Homecoming court, but this was the first year sisters had the honor. Brianna and Tia said sharing the experience together was inspiring.

“It’s nice to be surrounded by people who understand our culture and who are enthusiastic about it,” Brianna said.

Whether waving from the backs of convertibles during the parade or walking through the president’s backyard tailgate, Tia and Brianna were stopped for photos and thanked for joining the Homecoming festivities. One young girl even stopped the princesses to ask, “You’re real Seminoles?”

Nearly 80,000 fans cheered from the stands during the halftime show as Tia and Brianna walked down the field to crown the court; it was a proud, yet emotional, moment for their mother, France Blais-Billie, who said she wished the girls’ late father, July Billie, could have seen it.

“He would have been so proud,” she said.

The school’s appreciation and adoration was also shown through president Barron’s wardrobe choice during the parade, a traditional Seminole shirt, and former football coach Bobby Bowden’s gracious acceptance of a handmade Seminole doll from the Seminole princesses.

“It’s always a treat to have the Seminole Tribe here at FSU,” said Scott Atwell, president of the Alumni Association at FSU.

The Tribe’s relationship with FSU has held strong through decades of tradition, even in times of controversy. In 2005, when the NCAA wanted to strip FSU of the Seminole name because of its “hostile and abusive” nature, the Tribe supported the school – and still does today in the wake of the Washington Redskins controversy.

“With the flare up with the mascots, I want to make sure we support our team,” Chairman Billie said.

Jeff Ereckson, director of development at FSU and a former rider of the Osceola and Renegade pageantry, said that prior to his time as a rider, he knew very little about the Seminole Tribe. But as he took on the role, he began to appreciate the Tribe and its history.

“We do the best we can to embody Seminole Spirit,” he said.

For the first time, the Seminole Police Department was invited to join the FSU Police Department as security for Homecoming events. They escorted the football team’s buses to the game and also participated as part of the parade cavalcade.

“For us to come up and represent the Tribe is a great reflection of the Tribe’s wonderful atmosphere,” said Seminole Police Department Police Chief William Latchford.

He said establishing a relationship with the school’s police department will not only offer a chance to compare notes and policies but also will help them extend protection to Tribal members attending FSU.

“It’s always a pleasure to be back,” said Kyle Doney, a member of the Alumni Association Board of Directors.