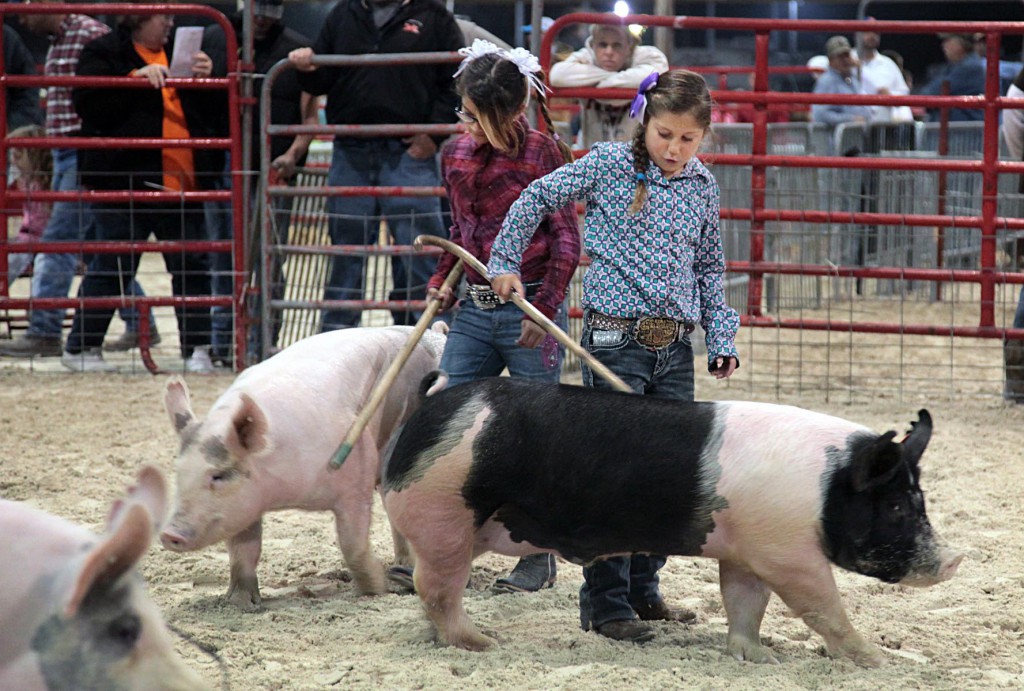 Karlyne Urbina, 10, and Rayven Smith, 17, of Brighton; Caniah Billie, 10, and Geneva Garcia, 12, of Immokalee; and Jalee Wilcox, 8, of Big Cypress, raised their animals for about 100 days, tracked their costs and ultimately took home profits for their efforts.

“It makes me feel very responsible,” said Rayven, a six-year 4-H Club participant. “You have to take care of your pig. Getting it to make weight is the hardest part.”

His hog weighed 290 pounds, among the largest of the 157 entered in the show. Bettye Thompson, coordinator of the South Florida Fair livestock show, said this year’s show had more hogs than any previous year. Last year, there were 93.

The 4-H’ers get their pigs at about 3 months old, and then feed, clean, groom, walk and care for the animals until taken to market.

“Last year it was harder to shave and wash him,” said Caniah, who showed a hog for the second year. “Now I know how to walk him and steer him much better.”

First-timer Jalee was a trooper in the ring, even though her 242-pound hog lay down in the middle of the show ring: “He’s always tired,” she said. “It was kind of scary being in the ring in front of all those people.”

The hogs are divided into weight classes, ranging from 230 to 299 pounds, and the kids take turns presenting their hogs to judges. Criteria for judging include the amount of fat on the animal.

“I felt scared,” said Geneva, who has been raising hogs for five years but showed for the first time at the fair. “It was hard. My pig moved around a lot, and I was trying to keep up with it.”

Karlyne, who showed a hog for the fourth year, has a long-term goal in mind for showing and selling a hog each year.

Aaron Stam, Florida Cooperative Extension Agent based in Brighton, has followed the progress of the kids and their livestock.

“The kids have been really responsible,” Stam said. “They learn responsibility, get a work ethic and get to see the cause and effect of the business model. They are exposed to a great model for education and business by raising a pig. As a former teacher, I wish all kids would have to raise a pig.”