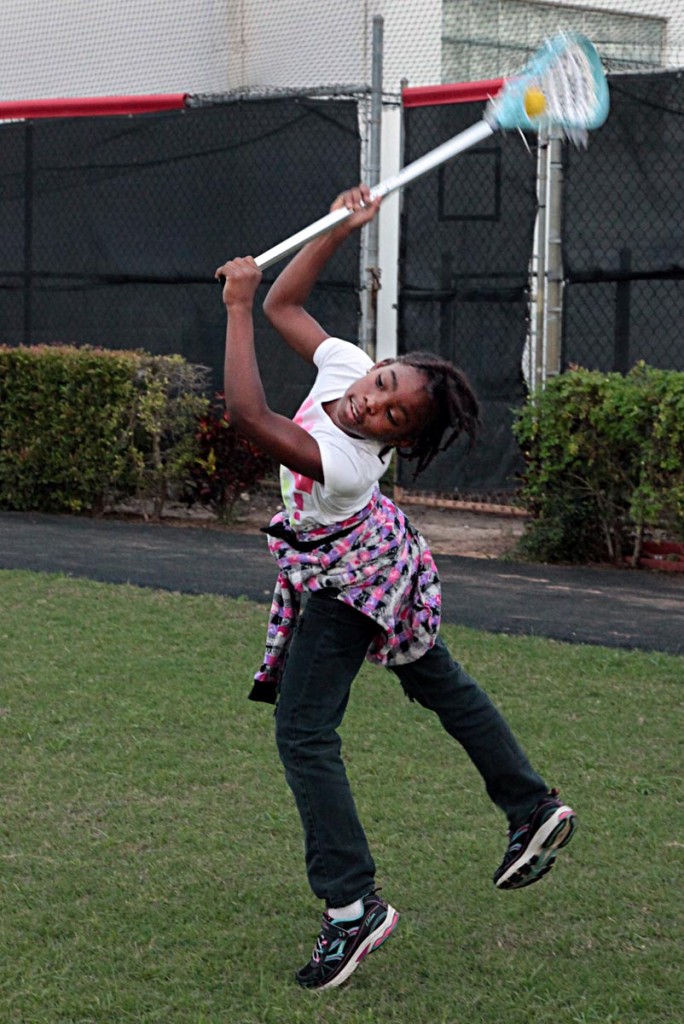 HOLLYWOOD — Lacrosse has come to the Hollywood Reservation, with classes every Monday at 4:30 p.m. Because many Tribal kids are familiar with stickball, they are taking to lacrosse naturally.

The ancient Native American game of stickball – once played by warriors for training, recreation and religious reasons – evolved over the centuries into lacrosse.

An early game of stickball was documented in the 1612 book Historie of Travel into Virginia Britanica by William Strachey but could have been played by Native Americans for hundreds of years before Europeans witnessed it. Strachey, who watched the Powhatan Tribe in Virginia play, compared it to a game played in England similar to field hockey but with two trees as the goal.

Although common throughout Indian Country, stickball varies from Tribe to Tribe. For some Tribes in the southeastern U.S., including the Choctaw and Cherokee, stickball is a highly competitive sport. For the Seminole Tribe, stickball is a social game.

“It is between men and women,” said Bobby Frank, Hollywood Community Culture Center manager assistant. “It’s how they meet, like a sock hop for boys and girls. People really look forward to it. Older generations watch the younger ones play; it’s a happy game.”

According to the Federation of International Lacrosse, the game may have originated in the St. Lawrence Valley by the Algonquian Tribe and moved to other Tribes near the Great Lakes and the eastern U.S. Games were major events played over massive open areas between villages, sometimes with hundreds of players and sometimes lasting for days.

Tribes and villages also played games to diplomatically settle disputes. These games, although peaceful in nature, were hard fought contests. In fact, the Cherokee name for the sport translates roughly to “little war.”

Since the mid- to late 20th century, stickball has had a renaissance in Indian Country. Several Tribal tournaments are held at events across the nation, including the Jim Thorpe Games, the Choctaw Labor Day festival and the Mississippi Band of Choctaw Indians World Series of Stickball.

Lacrosse has also gained popularity. The objective is to throw the ball into a net at either end of the field. A game is 60 minutes long, played in four quarters. Similar to field hockey and soccer, there are 10 players on the field at a time: three defenders, three midfielders, three attackers and a goalie.

A group of kids came to the Hollywood Ball Field for class on a recent Monday afternoon, where the Recreation Department provided sticks, nets and instructions.

“Lacrosse is fun and it’s a Native American sport, so it honors our heritage,” said Cameron Osceola, 16, a former player for the University School. “It’s similar to stickball but our Tribe plays boys against girls. Other Tribes made their own version of it so they could have something they could call their own.”

Osceola said the stick is an important part of the game. How a player strings it identifies his culture; Osceola uses traditional stringing.

He and Alexander Lieberman, a former teammate at University School, helped coach kids less familiar with lacrosse. They practiced throwing, catching and scooping up ground balls.

Recreation site managers want to initiate lacrosse programs on the reservations. Hollywood site manager Brian Dodd believes it will catch on because they aim to start a tribalwide program with competition between reservations.

“Being a Tribal game and having Tribal kids play it is a win-win,” Dodd said. “We don’t want to lose sight of the culture. Just like every other sport, we want to create that fun, family togetherness on all the reservations.”