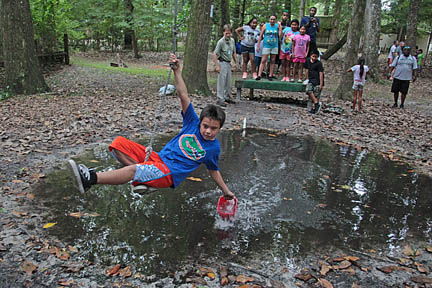 HIGH SPRINGS, Fla. — Kids had tons of fun at Camp Kulaqua in High Springs, Florida where they made new friends, floated down the Ichetucknee River and dared themselves to take on the infamous blob.

“We want the kids to know there are other ways besides sitting in the house; they can get outside and play,” said Helene Buster, Family Services Department director who led camp. “We try to keep them moving and walking. We want them to just change their lifestyle and not be so sedentary.”

Forty-six teens attended Kulaqua as campers from July 27 to Aug. 1, and 23 stayed to take on the responsibility of serving as junior counselors during youth camp Aug. 3-8.

“You have to be really careful and keep an eye on all of them,” said Randee Osceola, 15. “Their lives are in your hands and you’re watching them grow up. This is crazier than teen camp because they are so little. Their brains are still young.”

The junior counselors met daily with supervisor Victoria Soto, of the Education Department, for guidance and discussions of any concerns they had about their roles. Soto also reiterated their responsibilities.

Many young campers were attached to the junior counselors day and night.

“They all love me,” Alexis Aguilar said. “I look at this as a chance to get to know the younger generation. One night they didn’t want to go to sleep, so we had a dance party. It was a lot of fun.”

During activities, junior counselors joined in the fun and helped the young campers.

At the low ropes course, a series of physical activities that emphasize trust, junior counselors played a key role leading the youth. The activity stations included nitro crossing, spider web, trust fall, island hopper, balance beam, centipede and climbing wall. All required participants to work together, encourage one another and achieve success as a group.

Highlights included swimming at the River Ranch and Hornsby Spring, home of the blob; running relays in the boxcar derby; creating artwork for a poster contest; competing in the Seminole Olympics; performing in a talent show; and tubing down the Ichetucknee River.

“The river is the best because I don’t have to stay with my counselor,” said Donovan Harris, 12. “And I love the blob.”

For some campers, living with other kids away from home was the most fun.

“The cabin,” said Madison Jumper, 10, when asked her favorite thing about camp. “It’s really fun. We go mattress surfing down the stairs.”

“We tell funny stories, listen to music and play games at night,” added Jahniyah Henry, 10. “We want to stay in the cabin all day.”

Junior counselor Marsha Osceola, who had a cabin of 12-year-old girls, said her campers were an “interesting bunch.”

“They’re goofy,” Marsha said. “They like playing ghost at night. It’s a lot of fun. They are my favorite group.”

During the Seminole Olympics, kids were divided into eight teams and competed in human foosball, steal the bacon, earthball soccer and the mud mayhem obstacle course.

“I like watching the kids have fun,” said Kyle Alvarado, 16. “I’m really enjoying them.”

“The teens were fantastic,” Buster said. “They were open to learning and doing things. They did exactly what we wanted.”

“Being in a different cabin and making new friends every year is the best,” said Vincenzo Osceola, 9. “I will come back next year.”