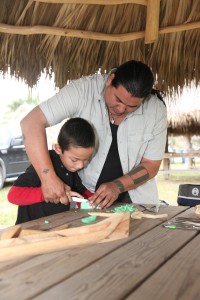 BIG CYPRESS — The art of carving is being passed along to the next generation thanks to the efforts of the Community Culture Department. Vinson Osceola led a soap carving workshop at the Willie Frank Library in Big Cypress on Nov. 27.

The fresh smell of soap permeated the air under the chickees behind the library as Tribal youth learned to carve using the relatively soft medium and dull knives. Only after they hone their skills and learn to carve confidently will the children graduate to wood carving.

The technique for both is the same, but wood is significantly more difficult to carve.

With a lot of patience, Osceola and other members of the Community Culture Department taught the kids how to hold the knife and carve away the soap slowly and carefully. The kids chose whether to carve a turtle, canoe, dipper or dolphin. Most of the kids, whose ages ranged from about 6-11 years old, chose turtles.

“We only have an hour, but an hour is a good start for this age group,” said Osceola, of the Big Cypress Community Culture Department. “The turtle, canoe and dipper have historical significance since they are items we’re exposed to and have always lived with.”

“The younger ones start with soap, and now we have older ones who are starting to carve wood,” he said. “They are advancing to more detailed projects; they want to challenge themselves. The skill is being handed down slowly.”

Many of the kids under the chickee carved for the first time; others had experience.

“This is my second time carving,” said Dylan Robbins, 7. He said he looks forward to carving again, but next time, he wants to use a more challenging medium. “Soap is easy; I want to try wood.”

As with anything in life, confidence comes with experience.