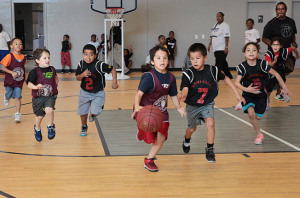 The event was a hit with kids from Big Cypress, Brighton, Fort Pierce and Hollywood. And while competition was fierce among the teams comprised of 5-6, 7-8 and 9-12-year-olds, friendship was the real winner.

“Our goal was to let them get to know children from other reservations and learn good sportsmanship in an organized setting,” said Remus Griffin, Fort Pierce Recreation aide. “But the main thing is the fellowship with relatives and other Tribal members.”

The gym, which features a full-size basketball court and six retractable hoops, showed its flexibility throughout the day. To accommodate the different age groups, the space was converted during the tournament from one full-size court to two smaller courts – a half-court and a smaller full-court.

Griffin plans to host more tribalwide activities at the site.

“We’ve been waiting in Fort Pierce for a long time to have a sports facility,” he said. “It’s something to share.”

Brighton captured all age categories during the competition and had fun in the process. Javaris Johnson, 9, of Brighton, said scoring points was the best part of the day.

Adults enjoyed the camaraderie as well, but never forgot their roles as mentors and coaches.

“The kids are excited to leave the reservation and they love basketball,” said Big Cypress coach and Recreation coordinator Dessie Thomas.

She said youth love basketball and were excited to meet in Fort Pierce, where she encouraged them to play as a team and never give up. Dallas Nunez, Brighton Recreation site manager, said the event was also a great way to support Chupco and their new facility.

“It’s a fun day,” said Hollywood coach and Recreation aide Ashley Wilcox. “They are here just to play and meet their family and friends. It’s bonding, not competition for them.”