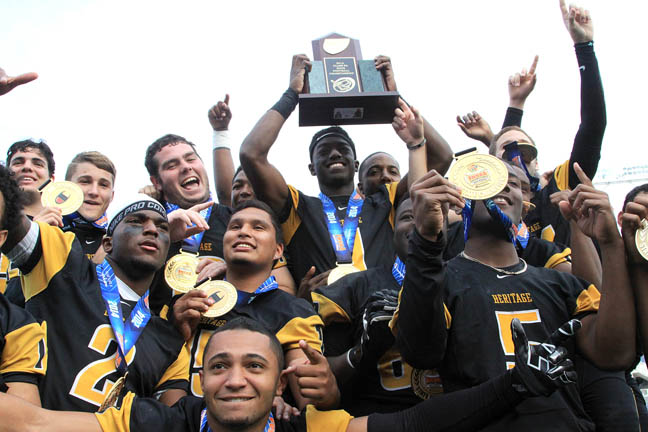 ORLANDO — Andre Jumper wanted to soak in every last drop of the state championship atmosphere.

After four years as a standout on defense for American Heritage School in Plantation, Andre made a triumphant departure in his final game Dec. 12 as the Patriots earned their second consecutive state championship with a 38-0 win against Tallahassee’s Godby in the Class 5A title game.

In the game’s waning minutes at the Orlando Citrus Bowl stadium, Andre and fellow lineman George Ellis III started to make preparations to douse head coach Mike Rumph with a water cooler. At the two-minute mark, they snuck through players on the sideline and emptied the orange tub over Rumph, giving the team another reason to celebrate.

As a sea of black and gold uniforms celebrated at the end of the game, Andre managed to do a mini-Lambeau Leap into the arms of Heritage fans in the stands. Amid the hoopla, Andre didn’t lose sight that his first and only season as a varsity teammate with his younger brother Blevyns had come to an end.

“I liked it a lot. I’m glad he made the decision to come and play and get the experience,” Andre said.

“It means a lot to me because it’s my brother’s last year. I love winning the state championship with my brother,” added Blevyns, a junior who finished his first season on varsity with a flawless day as the long snapper – a role he handled all year – on five extra points and one field goal in the championship game.

The victory for the brothers from Big Cypress came in front of several family members, including their parents, Josh and Andrea Jumper; sisters, Ahnie and Canaan; grandfathers, Moses Jumper Jr. and Jonah Cypress; and grandmothers, Laquita Jumper and Carol Cypress.

“Half of our family is here, so that means a lot, too,” Andre said.

Andre started the game in his usual spot on the far left side of Heritage’s line. The 6-foot-1, 240-pound senior defensive end made the first of his three tackles on the game’s second play. In the fourth quarter, Andre and Tyler Gordon combined for the team’s only sack as they handed Godby quarterback Darius Bradwell a 12-yard loss.

The intriguing matchup between 5A’s champions the past two years didn’t feature much drama.

Heritage’s 14-0 lead at halftime doubled to 28-0 after three quarters.

By the end of the game, Heritage’s defense held Godby to 179 yards of total offense and dealt the Cougars their first shutout of the season.

“I expected a win, but I didn’t expect a shutout. I was pleasantly surprised,” said Mike Conrad, Heritage’s defensive line coach.

Andre played in all 15 games for the 12-3 Patriots. He finished fifth on the team in total tackles with 70, which included 27 in five playoff games. His 50 assisted tackles were second most on the squad.

“He had a good year,” Conrad said. “He had some ups and downs, but overall a lot more ups than downs. If he had a substandard performance one week, the next week he is going to be hell on wheels. He’s a tough kid, comes at you 110 percent every single snap.”

Most of Heritage’s playoff run was void of suspenseful finishes thanks to lopsided victories; however, its 20-17 win against Orlando’s Bishop Moore in the state semifinal Dec. 5 was filled with anxious moments right up to the final second.

With the score knotted at 17-17, Heritage marched down the field to set up a 38-yard field goal attempt with four seconds left.

It’s tough to think of a more nerve-racking moment in high school football than a last-second field goal attempt in a state semifinal.

Blevyns delivered in the clutch as he sent a strong snap back to holder Jason Brown, who set the ball for Oren Milstein’s winning kick as time expired.

“I was a little nervous,” Blevyns said. “Right when I snapped it, I lost my breath. When it went through the goal, I was relieved.”

So was the entire Heritage team, which erupted in celebration as their bid to repeat as state champions remained alive.

“People overlook the snappers, but they come up big,” said Andre, who had five tackles and an interception in his final home game. “I’m proud of (Blevyns) playing big. I had no doubt he was going to get the ball back there; I had no doubt in my mind.”

Heritage led 17-7 at halftime but could have built a bigger cushion. Andre picked off a pass and returned it 46 yards for an apparent touchdown on the final play of the second quarter. However, a Heritage penalty – which occurred far behind Andre as he reached the end zone – negated the points.

Andre also came up big when Heritage’s defense held Bishop Moore to a field goal in the fourth quarter after a turnover in Patriot territory.

“They ran it to my side,” said Andre, who made two tackles in the series, including one for a loss. “We made plays and adjusted to it. I had a lot of players get there to help me out. We’re a team. The defense practices hard.”

In Orlando, Andre and Blevyns were among the final few Patriots to leave the field as the celebration – and Andre’s high school football career – had all but wrapped up.

“It kind of hit me in the locker room before the game,” Andre said. “I realized that this is it. These guys mean a lot to me.”