Skip to content
You are here
Home > Education > Jonathan Idle shares own experiences, promotes positive futures for other teens 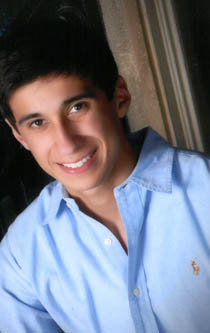 DAYTON, Ohio — Jonathan Idle has figured out some important things about life. Compelled to share the newfound information, the high school senior wrote a letter to his peers describing how hard work in school pays off in the end.

He hopes to encourage students to complete their educations.

Jonathan, 18, has earned a 3.61 GPA at The Miami Valley School in Dayton, Ohio, and has been accepted to the University of South Carolina. He plans to study chemical engineering. He lives with his mother, Jennifer Idle, in Ohio, and visits his father, Michael Frank, four or five times a year in Florida.

In his letter, Jonathan wrote about self-sufficiency and not relying on dividends. Education is not just about opening a book and taking tests, he wrote; it is also about trying new experiences and challenging yourself.

“Going through life, it’s really about what people around me have done for me to make sure I have the best life,” Jonathan said in an interview. “My mom is definitely the most important person in my life; she’s encouraged me to do so many things.”

Grateful for all the Tribe has provided, Jonathan has taken advantage of everything available to him. He has tutors and coaches; plays soccer, basketball, tennis and golf; takes piano lessons, which he began at 3 years old; travels extensively; and speaks Spanish fluently.

“I’ve always wanted him to see the big picture, that there is life out there and he should go see it and do it,” Jennifer Idle said. “He came home from school in the ninth grade and told me he wanted to go to Chile with his school.”

Jonathan went on the trip and lived with a host family for 10 days. In 10th grade, he went on an educational tour of Spain, France and Italy, and in 11th grade, he traveled to Ghana in Africa, where he helped build the ground floor of a hospital with his classmates and lived in a local village for 15 days.

The summer before his senior year, Jonathan went with his aunt Debi Hand and her church on a 10-day mission to Belize where he helped take the roof off a building and plant a garden. In January, he went on a 10-day trip to Andros Island in the Bahamas, where he completed a marine ecology course and scuba dived.

“I made him try everything,” Idle said. “He’s receptive to whatever I give him to do. He’s my only child so I had more time to concentrate on him.”

The idea for writing a letter came from the Tribe’s Education Department. Higher education recruiter Vivian Cywink said the department is always on the lookout for students who can be an example for others. She knew Jonathan would be perfect for the assignment.

“He is a student who has worked very hard for everything he earned,” she said. “He intends to give back to the Tribe and this is his first way – to try and touch his peers and encourage them.”

Jonathan, who copes with the challenges of Asperger syndrome, is ready to take on the challenges of college. He chose the University of South Carolina for its engineering program and because his aunt lives only an hour away from campus. He believes anyone can be successful in life.

“I know people who have started with nothing and have gone on to do really great things,” he said. “My mom raised me and I’ve learned to cope with certain things and adapt. Anyone can do anything they aspire to do; there is nothing that’s impossible.”

A letter of encouragement to his peers

Dear members of the Seminole Tribe,

School is hard. It is really hard. I’m not going to lie to you and say it’s something easy; in reality, it is very difficult. I attend one of the most prestigious schools in my area and the work is so hard that I sometimes get frustrated and want to quit.

Like so many people before me, I sometimes felt that giving up would be easier than sticking it out. I know that we get a monthly dividend and I could probably live off of that, right? Well, that’s what I thought for a short minute. You see, I have a mom who does more research on things than you could ever imagine and she showed me a few things that kicked me into high gear.

Other Tribes around the country receive dividends, too. Like our dividends, their dividends have been getting smaller and smaller; they are to the point that surviving on those dividends is near impossible. My mom told me that the dividend should be used for nothing other than my future, that it needed to be invested, and so I went and talked with people close to me to show me how to be smart about my money and help it grow. I also made the decision to attend the financial seminars, which helped me understand how the real world works and how I should manage my money wisely. My money will help me some day when I’m ready for it, but I won’t have to survive solely on it.

Now you may be asking what I could be doing if I’m going to survive without touching my money from the Tribe. My mom instilled a desire in me to learn and to educate myself. From a very young age, she placed me in the best schools, procured tutors and made sure I stayed on top of my classes. She introduced me to people who have helped me and encouraged me; they were more than just tutors. They instilled the desire to be educated just as much as my mom. Surrounding myself by people who educated themselves showed me the importance of attaining that level of thinking and understanding. Intelligent conversations, debates, inquiries … all of these things became more and more interesting to me as I worked with Martha and Daniel.

Part of my education is not just opening up a book and taking tests. It’s about trying new experiences and challenging myself to go further than I already was. My mom pushed me ever since a young age to partake in sports such as basketball, golf, tennis and baseball and learn how to interact with those around me. I started out crying and telling my mom that I didn’t want to play with the other kids. Now, I have developed into a leader on and off the court; one who is willing to go 100 percent every night and is not afraid to make decisions.

Another thing my mom has pushed me to do in recent years is travel the world and learn about cultures abroad. She has sent me off to three different continents in the past four years, allowing me the opportunity to partake in tourism, missionary work and foreign exchange programs. During these trips, my routine and customs from America had to be changed in order to get the full experience of the land. Doing this offers a new perspective on the world, and when I return home, I can feel the change in my persona.

Because of my hard work, good grades and drive for excellence, I was able to gain admittance into the University of South Carolina’s College of Chemical Engineering. This program is one of the top 100 programs in the nation and holds its students to very high expectations. I am excited, not scared, by the challenges that lie ahead and look forward to furthering myself in the future.

These things weren’t possible for me just because I’m some super genius or amazing at everything I do. They were made possible because the right people supported me and I knew I had to do well or my life would be over … over in the sense that I wouldn’t make the best of everything I’d been afforded. The Seminole Tribe helped pay for my tutors, my prestigious schools … for which I’m extremely grateful … but I also had to prove myself over and over and that hard work and determination has benefited me more than you could ever imagine.

You, too, can do just as well as me, or better; I have no doubt about that.