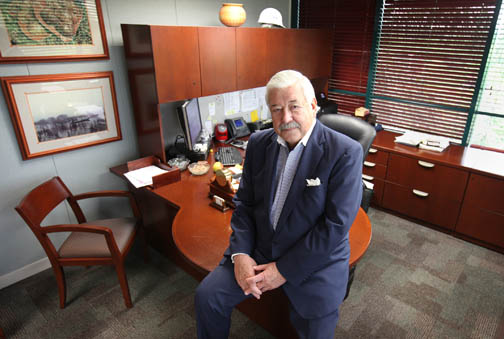 HOLLYWOOD — The man who Chairman James E. Billie calls “one of the most professional men I’ve ever worked with” has retired.

Ed Jenkins, 70, credited by Chairman Billie for holding the Tribe’s reigns during meteoric gaming success that led the Tribe to become the first in Indian Country to achieve self-regulation from the National Indian Gaming Commission (NIGC), worked his last day April 30 as the executive director of Seminole Gaming Compliance and Regulation.

Jenkins ran the regulatory body of Seminole Gaming, made up of nose-to-the-grindstone investigators, analysts and surveillance experts; oversaw the government-mandated standards of the Tribe’s seven gaming operations from Tampa to Hollywood; and answered to the Tribe’s five Council-appointed gaming commissioners.

“To Ed I say ‘sho-naa-bish’ from the bottom of my heart,” Chairman Billie said.

Barbara Calisanti, manager of the background and licensing unit, said Jenkins made sure everything “was on the up and up. He established transparency and put the rules and regulations in place.”

NIGC is an independent regulatory agency authorized by Congress through the Indian Gaming Regulatory Act of 1988. Under the Act and subsequent NIGC regulations, self-regulation is only granted if a Tribe proves it has satisfied all requirements, including a three-year review to ensure that gaming activity is compliant with IGRA, NIGC and the Tribe’s own laws and regulations.

The Tribe must also always account for all gaming revenue; have earned and maintained a reputation for safety, fairness and honesty; be free of illegal activity; and operate on a fiscally sound basis with adequate accounting, investigation, licensing and enforcement systems in place.

“[Jenkins] put all of the regulations in place to the ‘T’ and because of that, no question about it, to this day other Tribes look to us for guidance because we are the first to accomplish self-regulation,” Calisanti said.

In October 2014 when then-NIGC Acting Chairman Jonodev Osceola Chaudhuri presented the certification, Chairman Billie insisted that Jenkins instead of him pose for photos with Chaudhuri and gaming commissioners. Chaudhuri was confirmed by the Senate as the new chair of the Native gaming commission on April 16. NIGC provides oversight for more than 450 Native American gaming establishments operated by about 250 Tribes in the United States.

Jenkins, born and raised in Newark, New Jersey, earned a bachelor’s degree in business management from Seton Hall University in 1966 while working in support services for the FBI. He was then promoted to FBI street agent in Louisville, Kentucky; Gary, Indiana; and Detroit, Michigan. In 1989 Jenkins was named the assistant special agent for the agency’s Organized Crime and Drug Section in Las Vegas. He retired from the FBI at age 47 to become vice president of security at Caesars World Inc. and later the head of corporate security for MGM Grand in Australia.

Jenkins was hired by the Seminole Tribe to serve as a gaming consultant in 2001. The Tribe’s flagship Seminole Hard Rock Hotel Casino opened in 2004.

“I came on as a 60-day consultant and now almost 14 years later I’m still here … I came with a 6-foot, 4-inch body of steel and jet black hair. Now I am white haired and well …,” said the grandfather of five.

Jenkins said he set his personal goal “on day one” at earning self-regulation for the Tribe. And from day one, he operated a tight ship as a no-nonsense manager.

“All of the policies and procedures formulated and based on Class III regulations in Nevada, and later when slot machines and table games were added, were made universal throughout Florida – all the same from Tampa to Hollywood,” Jenkins said. “Everything fell into place.”

Employees learned his mantra by heart: If it isn’t in writing, it doesn’t exist.

“What did I learn from Ed? To dot my I’s and cross my T’s. You know when you have to present to Ed you have to be on the mark,” said gaming investigator Karen Alena.

Chairman Billie said Jenkins left a disciplined and strong impression and will be missed.

“I was always a wild card kind of guy. I shot from the hip and needed Ed to keep the aim straight,” the Chairman said. “I may get things going in unorthodox ways but I have professionals like Ed Jenkins, Jim Shore and Jim Allen – all good people – to keep us in good standing.”

The compliance and regulation staff toasted (and roasted) Jenkins during a private dinner at a Fort Lauderdale restaurant where they awarded him with an album that included photographs and newspaper clippings that heralded landmarks in Jenkins’ Seminole Gaming career.

“He reached for the summit and took the Tribe with him,” Calisanti said.

Jenkins, who cooks dinner every Wednesday for senior ladies at his Fort Lauderdale condo building and has written cookbooks of his favorite family recipes, plans to spend more time with his wife of four decades, two children and five granddaughters at his homes in Nevada and California.

Soon, he hopes to launch a retirement gig as the owner of Tribal Gaming Regulatory Consultants in Las Vegas.

“I’m leaving with mixed emotions. The Tribe has been good to me, but it’s time for me to go home, play with my grandchildren and relax for a while,” Jenkins said.