Skip to content
You are here
Home > Community > ‘It is the truth:’ 16th annual Shootout celebrates Seminole victory 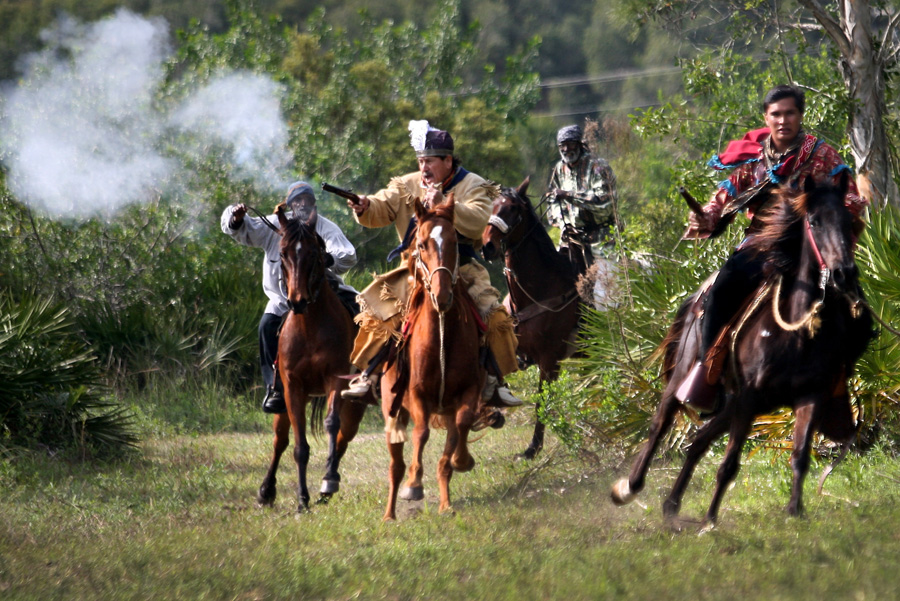 BIG CYPRESS — Duane “Handlebar” Decker was given important instructions before heading into a field dressed in 1837 militia garb to reenact a bloody United States versus Seminole battle at the Big Cypress Reservation.

“They told me to go out there, act like I’m scared and make sure I die,” said Decker, of Apopka, playing the U.S. side at the 16th annual Big Cypress Shootout – Second Seminole War Reenactment.

The March 1-3 event – with authentic U.S. and Native American camps, weaponry, clothing and the battle reenactment – had to conclude correctly, said Moses Jumper Jr., on horseback as a Seminole warrior.

“What you will see is not John Wayne killing hundreds of Indians and then riding off in victory. This is our story and it is the truth,” Jumper said to hundreds gathered on a grassy hill overlooking the battlefield. “We are the Unconquered.”

“We came this far south in the River of Grass. We were pursued by the United States and told we were not allowed to stay. But we did not go to the Trail of Tears. We stayed and we fought until the last blood was spilled,” Jumper said.

Fighting alongside the Seminoles were African-American freed and escaped slaves who had assimilated into Native American ways. Jumper called them “our black brothers.”

Gunfire and cannon blasts filled the air with booms and smoke. Americans, as an expeditionary force complete with land surveyors, were shot down in one of many skirmishes that would lead to Seminole freedom.

About 1,500 Boy Scouts and Girl Scouts, plus troop leaders and families, packed the spectator area. History buffs and photographers jostled for better views. Many in the crowd had camped out on the reservation for the three-day event.

Mike Law, of Lake Worth, attended with his wife, Kathy, son, Alex, 6, and daughter, Elisabeth, 2. For the Law family, the event was about education.

“We had a good idea of how the reenactment would end. Getting to see our history happen is getting to know our country a little better,” Law said.

For Mark Lynch, of Miami, it was a powerful reminder.

“The Indian people were screwed over by the government. They took the brunt of racism with the biggest screwing in the world – at least in the United States,” he said.

Jumper said the land on which the battle was relived was the site of an actual skirmish led by Abiaka.

Because the Seminoles’ knowledge of the land gave them an advantage, their guerrilla tactics in conflicts often led to U.S. defeat, said Jacob “Jake” Osceola, head of operations at Billie Swamp Safari and an organizer of the Big Cypress Shootout.

“Sometimes we would do an ambush to get supplies and shot (guns and ammunition). We had to because very few people would trade with us and we had to protect our land,” he said.

At the end of each of three battles, the U.S. and Seminole reenactors lined up for a gunfire salute to veterans of all wars and U.S. troops serving now.

Decker said nearly 100 turned out to relive the U.S. side. Some were members of the 11th Tennessee Brigade and the Sons of Confederate Veterans Camp 2150. On the Native American side, Seminole Tribal members and people from all over Indian Country participated in the reenactment.

Paul Morrison, as the historical Swamp Owl, said he is descended from the Mohawk Tribe and the Mayflower. His third great-grandfather was Hiawatha, co-founder of the Iroquois confederacy, he said.

“I’ve been doing this for 15 years to bring history to life so you can see it, hear it, smell it, taste it,” Morrison said.

Gaha Halftown, a Seneca from Niagara Falls in Canada, said he tries to attend the Shootout as often as possible. This year, about 20 Seneca Tribal members participated.

“We were told about our heritage but we kept it a secret,” Downs said. “Now we learn as much as we can with our children, even moccasin and drum making, so that it can be passed down.”

Stomp dancing, led by Traditional Arts and Outreach coordinator Pedro Zepeda, was performed for the crowd. Later, more than 50 from the audience held hands with Tribal members in the Friendship Dance.

Necho Logan, 10, of Fort Myers Cub Scout Pack 761, said the “coolest” discovery for him was learning the difference between a crocodile and an alligator, both displayed at a live animal exhibit. But the “most important” realization for Necho, of Cherokee lineage, came as he watched the Shootout.

“Back then the people had to work together to keep their land,” he said. “I think I will always remember that when we work together, we can accomplish anything.”