Skip to content
You are here
Home > Community > Cattlewomen forge ahead, organized and determined 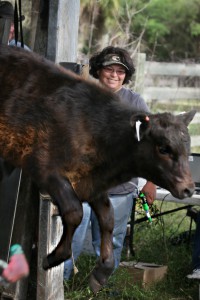 One by one, the cattle from Shule Jones’ pasture on the Brighton Reservation were led into headgates where they stood motionless from the neck down for annual inoculations, physical checkups and tagging.

The cattle were testy while a team of cowhands and a veterinarian pricked and prodded them, tagged and notch-branded their ears and shot milky white medicine into their mouths.

Every human cleared the way when bucking bovines, hooves flying, charged head first out of the chute back to freedom.

It’s a messy process: Cattle slobber flew everywhere, there was blood and, at the end of the day, the workers were baked in sweat and dirt.

At the helm were a handful of women from the 2-year-old Florida Seminole Cattlewomen’s Association who welcomed the hard work on the pasture that Jones, 83, has held in her family for four generations.

Melissa Gopher used an electronic wand to gather data from implanted microchips. She also administered tags. Lonnie Gore tracked procedures on a clipboard. The group’s president, Emma Jane Urbina, transmitted data into a computer program that details the lives of every cow, bull and calf.

“It’s up to the younger daughters now,” said Happy Jones, 86, sister-in-law to Shule Jones and owner of her own cattle herd, also on the Brighton Reservation.

The elder women, the oldest among female cattle owners Tribalwide, were young when the Seminoles first took possession of 547 head of Hereford cattle from the U.S. government in the mid-1930s.

“At one time they were handing out cattle to families, so we signed up. Later, they bought a shipload out in trains. We bought about 50 head for $5,000,” Shule Jones said. That was in 1954.

She never knew where the bulls came from, but they did their job as calves were produced. Still, poor grazing land did not provide enough nourishment and many of the initial heads of livestock perished.

“We had the cattle but no good pastures. We were always afraid we’d lose them,” Shule Jones said.

For many years, the women’s role was to open and close gates for cowboys and keep the men fed. Only a few women owned cattle and pitched in to care for the livestock even as several epidemics threatened to wipe out entire herds.

Now, more than half of the Seminole cattle owners are women and the Tribe is the leading beef producer in Florida. Today, the cattle are primarily Brangus – a cross between Brahman and Angus.

“The daughters are cooking today. It’s our service to them for their service to us,” Judy Jones said.

Most women, like Shule Jones, Happy Jones and Louise Gopher, took over herds left to them by male relatives who passed away.

“I learned about (cattle) when they landed in my lap. I always thought it was a matter of going out there and opening the gates for cowboys. No one ever explained the cycle,” Louise Gopher said. “It’s a man’s world and they don’t tell you anything unless you ask. I’ve been finding things out for 30 years.”

The cattle women’s association began in Sept. 2009 with about 20 women. Carla Gopher, the association’s treasurer, said the first official meeting was held in December 2010.

“We wanted to make real money in the cattle business and we want to give back to the Tribe,” Urbina said.

The Seminole group, now about 35 members strong, aims to promote and perpetuate the legacy of the Seminole cattle business for future generations, regardless of gender.

The women share news and hints about what’s going on in the cattle industry at home and nationally. One year, Gopher attended the Indian Agricultural Council in Las Vegas, where the group set up a display booth.

“We were a big hit. No one could believe Seminole women actually had a women’s association,” Gopher said.

Most are out in the pastures daily, working the cattle by baling hay, filling water troughs, counting head, repairing fences and so much more. Urbina has been doing the work all her life.

“I grew up in the cowpens. I can’t say it’s been fun but it’s the truth that it is hard work,” she said. “You have to be tough and quick on your toes, otherwise you can get hurt.”

Shule Jones goes to the ranch several times weekly to spread alfalfa pellets, which seem to settle the herd down. Happy Jones, who admits to being a feisty cowgirl in her younger years, said that’s what she misses the most.

“I was more like one of the cowboys and always out in the cowpen counting cows and making sure I was in control so nobody overcharged me. Then my legs gave out. Now the grandkids do it,” she said.

Happy Jones said female cattle owners of today have to be tough and business-savvy. Gone are the times when the Tribe would pick up costs for feed or veterinary care, she said. Now, a herd must produce an 80 percent ratio of calves to cattle for the owner to earn a profit. Last year was the first year that Happy Jones made more money than she spent. Shule Jones’ herd produced 100 percent this year – her best ever.

“The cattlewomen are doing OK. They are hard-working women, just like me. The best women – cowgirls all the way,” Happy Jones said.

On a recent Saturday, Judy Jones and her adopted daughter Elena Evans both joined the group.

“We all have an innate interest not just in having cattle but in working cattle,” Jones said. “When my dad was alive, we went out there and worked the cowpens. Now we have to learn more about it and be more responsible.”