Skip to content
You are here
Home > Community > Brighton Field Day at 75: From simple beginnings, a ‘diamond’ emerges 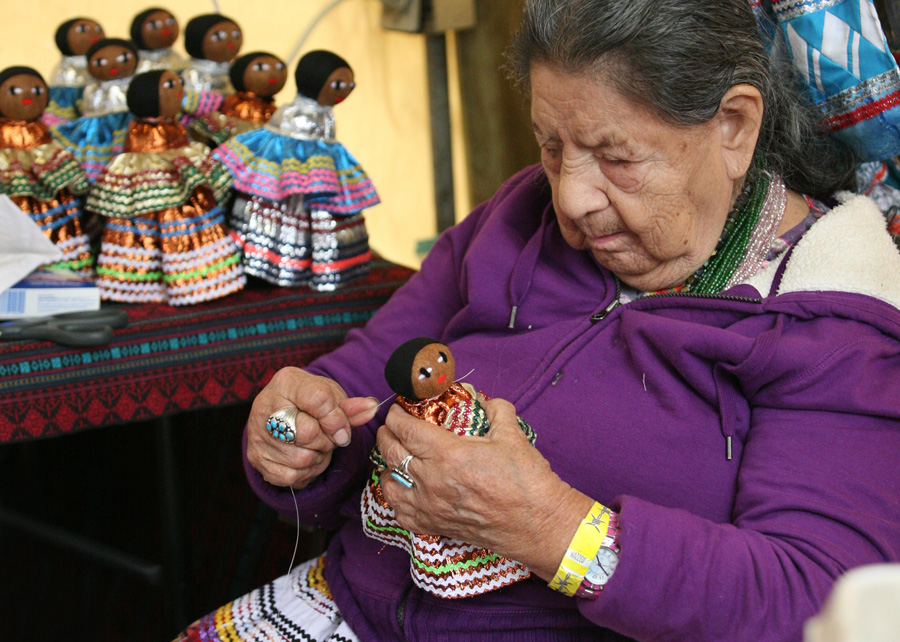 BRIGHTON — Thousands turned out to celebrate the rich culture of the Seminole Tribe during the 75th annual Brighton Field Day Feb. 15-17.

“This is a great time for us – a diamond jubilee,” Stanlo Johns told a packed house at the Fred Smith Rodeo Arena amphitheater during the opening parade on day two.

“Just think that so many years ago no one wanted this land, so the government said, ‘Give it to the Indians.’ We made this 34,000 acres what it is today. Otherwise it would still be swamp water,” said Johns who has been the event’s emcee for 45 of the past 75 years.

Now, 385 families call Brighton home, Johns said. And Brighton Preschool, established in 1965, boasts several generations of teachers who were once students there, he added.

“It was simple then. People were in foot races, pole jump and high jump contests, but not in a competitive way,” he said. “You had baby contests and clothing contests. No one registered. They showed up in their best clothes anyway.”

Prizes were also simple: a bag of horse feed for men; a bag of flour or sugar for women.

“Those were the finer days. It’s something we’ve lost – simpler times and simpler principals,” Councilman Bowers said. “Today we don’t seem to do anything without the almighty dollar.”

Chairman James E. Billie said the first Field Day was organized by early leaders to bring Seminoles from all over to one location to meet with government leaders and to discuss the official formation of the Tribe.

“I was about 6 years old, and I loved the pie-eating contests. Back then, we didn’t care if we won anything, we just wanted pie,” he said. “We were humbler then. We couldn’t afford much more than that.”

Lifelong resident Sandy Billie said his earliest memories of Brighton Field Day take him back to being a carefree 8-year-old, but he admits he only became active in cultural competition in his 40s. This year, Billie won first place among peers in the men’s clothing contest. He sported hunting clothes and a felt cap topped with a white feather plucked from an egret.

“When I was a kid, Field Days were about running wild and barefoot. Now that I am a grandfather, I realize it was always about the culture,” he said.

Councilman Bowers said another change came in the early 1990s when the event was switched from late summer to February to take advantage of tourist season. He said most tourists are curious about Seminole history and tend to spend most time in the chickee village where elders cook authentic foods and fashion beaded jewelry, baskets and clothing by hand.

A midway of vendor tents this year featured more clothing, artwork and other traditional items made by other Tribes from all over Indian Country, including Navajo and Lakota . Chairman Billie said the atmosphere could be reminiscent of old-time trading posts.

“Now we don’t have to go around the country looking for good leather, furs and tools made with animal bone,” he said.

Ginger Jones, of Brighton, who has attended for most of her life in the last three decades, said she enjoys the arts and crafts the best.

“It’s amazing that while traditions continue, every little thing is different. Nothing looks exactly the same because it is all one of a kind,” Jones said. The outfit that her son Ross Jones, 2, wore in the clothing contest, handmade by herself, won a first-place ribbon.

Food choices ran the gamut, from Philly cheesesteak to Mexican tostados and Polish sausage. But Councilman Bowers said no one could truly experience Field Day without a taste of Iona’s Fry Bread at the lineup of Seminole food booths or any frybread cooked over a wood fire by elder women in the open chickee.

Linda Chang, of Brighton, who took first place in the parade’s cowgirl competition, said the best part of Field Day is passing along traditions to her children and grandchildren.

“We have too many McDonald’s in a world where we used to live off the land. Field Day gives kids a taste of the past,” she said. “It’s important for everyone to come out and learn the culture. It’s modern tradition meets old tradition and it’s good to see how much has changed and much has stayed the same.”