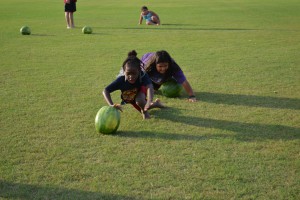 HOLLYWOOD — On June 30, the Hollywood Reservation celebrated the Fourth of July at the Ball Field. More than 100 Tribal members showed up to the event to celebrate the nation’s independence.

“I enjoyed the big waterslide the most, and I’m having so much fun,” 7-year-old Nettie Smith said.

“I preferred the jerk chicken the most,” Tribal member Brooke Osceola said.

Everyone enjoyed themselves and had a great time. Kids filled up water guns ready to battle, slid down the slides and ate fresh watermelon.

Hollywood Board Rep. Chris Osceola reflected on what Fourth of July meant to him at the event.

“Family, friends, food and fireworks,” he said. “Also, just spending time together on a holiday.”

“July Fourth to me means hot weather and celebrating Independence Day with your family and friends,” he said.

At the end of the event, many converged to watch the firework display light up the sky.