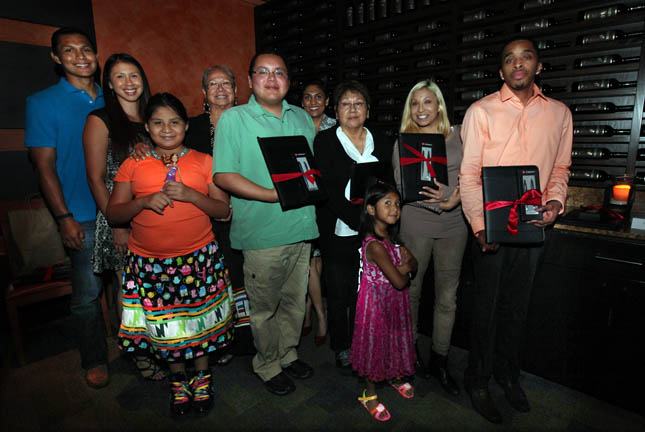 PEMBROKE PINES — Adult graduates from institutes of higher learning, including universities and trade schools, were awarded July 10 with dinner and gifts at Brimstone Woodfire Grill in Pembroke Pines.

“We prove that you will never know your own potential, or possibilities, unless you try,” said Edward Aguilar, who earned a bachelor’s degree in culinary arts from the Art Institute of Fort Lauderdale. He is currently working through the Tribal Career Development program.

Tucker, who works in the Hollywood Council Office, credited the Education Department for guiding her through cosmetology school from start to end.

“They have been wonderful – always there to discuss issues and concerns,” Tucker said.

At the beginning of her journey, Tucker was unsure of what supplies she would need. A department employee advised her to purchase a computer, an item Tucker never thought she would need for cosmetology.

“I was so wrong. It wasn’t long before I became very grateful for all their support,” she said.

Shruti Elliott, a higher education recruiter for the department, spoke highly of all the students and highlighted three: Stockton, as a well-rounded student and an example to others; Tiger, who will continue her education at Florida Atlantic University in the fall; and Agnes Billie-Motlow, who started college in the 1960s, earned several certificates and degrees since then and will earn a doctorate in December from Barry University.

Billie-Motlow, the assistant to Tribal attorney Jim Shore, recalled the early 1960s “flower power era” when the nation was in social chaos and money for college came haltingly to Native Americans from the Bureau of Indian Affairs.

“There was little money and 15,000 others applying for it. One year I had to work in the school cafeteria just to pay for basics,” Billie-Motlow said. “We (Seminole Tribe) are very fortunate to get the help we need.”

Veronica Ramsundar, program manager for the Education Department, said the office provides help every step of the way from discussing what schools to attend through graduation.

Achievement certificates and professional pen and pencil sets were awarded to recent graduates.

Billie-Motlow and other Tribal graduates were invited to the dinner to represent career success after college and to offer advice about life-long learning.

Jarrid Smith, who graduated from Florida Atlantic University “several times” since 2001, has since become a teacher at Ahfachkee School. He earned his teaching certificate just last year. Moses Osceola, who graduated in 1978 from Florida International University with a degree in business, is currently taking law courses online.

“In December I was appointed as a judge for the future Tribal Court. Now, I want to learn the law so I can do the best job possible,” Osceola said. “When I started in the ’70s I had to rely on a $652 grant. Today, the Tribe’s Education Department has grown so strong that I believe it’s the best thing we’ve ever done.”