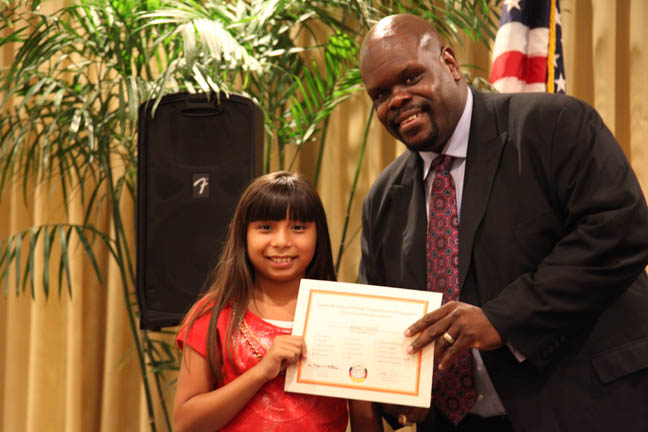 “When we were all in D.C. for [National Police] Week, there was a parade that honors all the officers who died in the line of duty…,” Apsey said. “That parade was more than 20 minutes long and this young man (Dominic Osceola) saluted all those officers as they passed.”

Dominic demonstrated his salute as the crowd cheered.

“In the four years we have had this program,” Apsey continued, “we have held 109 Police Explorer meetings. One young man – Desmond Miller – has missed only four of those meetings. He attended 105 meetings over four years. That is quite an accomplishment.”

Elder Services project coordinator Lola Juarez gave out the evening’s final awards for the academic achievement of Tampa’s Tribal elders: “Knowledge is power. The more you study, the more you learn. The more you learn, the better prepared you are to deal with life’s changes. It never matters how old you are. It is always good to feed it,” she said.

Honors were given to Linda Lee Henry for advancing to the GED level in social studies and science; Annie O. Henry for expanding her understanding of basic cycles; Linda O. Henry and Maggie Garcia for both achieving one grade level of improvement on the group reading assessment and diagnostic evaluation exam; and Nancy O. Frank for being the most advanced in vocabulary and reading fluency.

“Younger children, take pride in your grandparents coming to school,” Juarez said. “They did not have that when they were younger. This should make you guys want to learn now instead of having to wait. It’s never too late to pick up a book and learn how to read.”

“Keep up the good work,” he said. “We got young and old here today being represented. It is never too late to learn anything. Always get ready to learn something because one day you are going to be our future.”