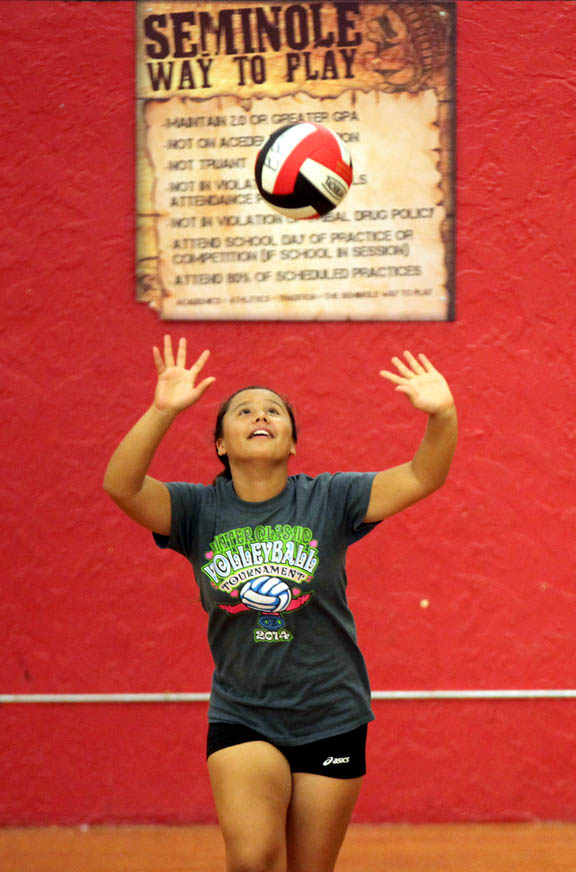 BRIGHTON — Some volleyball drills might not be fun, but the one performed by about 20 young players brought smiles that stretched from the net to the baseline at the Brighton Gym.

At the start of the afternoon session geared for middle and high schoolers, participants in the Haskell Volleyball Camp formed teams of about five each for a race from one sideline to the other.

As part of the fun three-part drill, players like Krysta Burton and Janessa Nunez controlled the ball with their hands and lower arms while running; others such as LaShae King and Madisyn Osceola hopped with the ball between their knees; and in the final exercise, Cheyenne Nunez and Alicia Fudge were among those who dove to the floor practicing digs.

The drill took all of five minutes, but it served as an important camaraderie builder that the camp carried from Brighton to Big Cypress during the tour June 15-18 that was split between the two reservations.

“For us at Haskell, it’s an opportunity for me to come out and create some relationships,” said Haskell volleyball coach Nana Allison-Brewer (Navajo), whose entourage in past years has included either her entire team or a couple current players. This year she brought former player Chamisa Edmo (Navajo, Blackfeet and Shoshone-Bannock) and former camper Heather Danny (Navajo) to assist with instruction.

Back when she was a player, Allison-Brewer had a blast competing in the North American Indigenous Games. Her teams won gold in 1997 and 2006. After she was hired to coach Haskell in 2011, she attended a scaled-back Indigenous Games in Wisconsin and was shocked to learn volleyball was canceled.

“There were not enough teams in the volleyball area,” she said. “I felt like, ‘Wow, how did that happen?’”

Since then, Allison-Brewer has deemed growing the sport within Indian Country a primary objective.

“Now that I’m at Haskell, I’m trying to reach out to all the Tribes and help them foster the sport of volleyball,” she said. “It’s another option for girls. Not all the girls maybe want to play basketball; there are some girls that are dual-athletes, triple-athletes, so I just wanted to encourage and help. How do you keep this sport alive in Indian Country or increase the activity within Indian Country?”

Part of her response to the question is done through camps, such as the one in Brighton where she saw talented players even in the morning session for 10 and younger.

“You can see such great skill with the little ones; some that are 5-years-old and can already serve overhand and spike the ball,” she said.

Whether those 5-year-olds or any other Seminole volleyball player someday plays for Haskell isn’t the reason Allison-Brewer runs camps, but at least the kids know they have a familiar face in Lawrence, Kansas if that’s their choice, she said.

“It’s always nice for me to identify some great athletes who might want to come out to Haskell and build some relationships, and hopefully they’re not so fearful if they were to come out. They know me already; they know my coaching style; and they know more about who I am and what I stand for,” Allison-Brewer said.

Regardless of college destinations, the coach is glad to play a part in their development. Case in point is Danny, the former camper who participated in Allison-Brewer’s camps throughout high school and eventually played for Fort Lewis College, an NCAA Division II program in Colorado.

“It’s neat to see her go through my program but then also continue on to that collegiate level,” Allison-Brewer said. “A goal we have is to help them.”