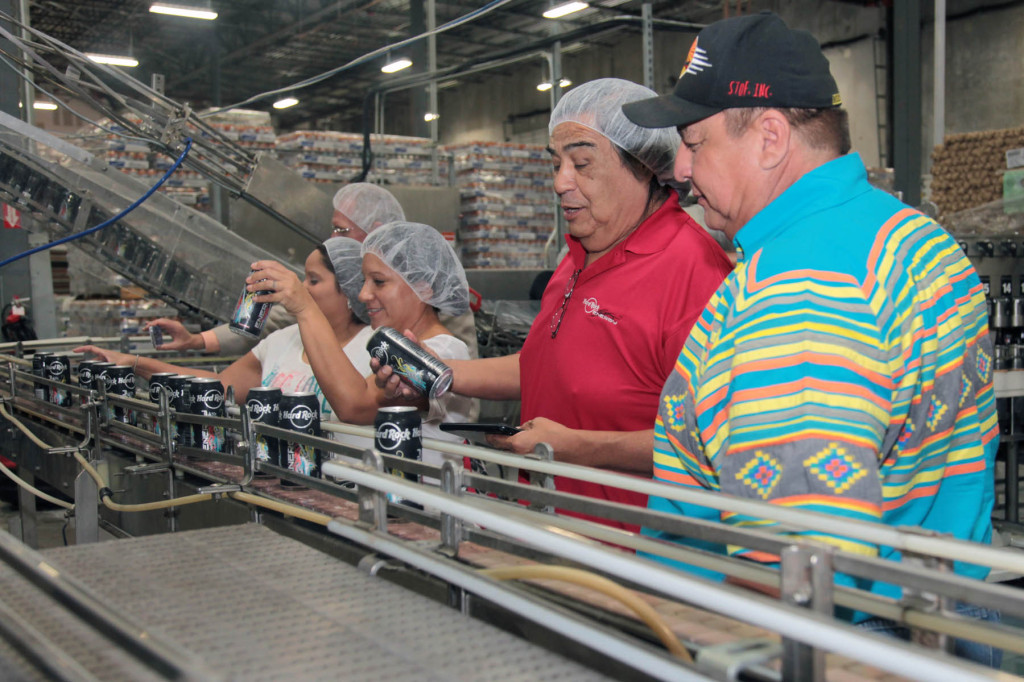 HOLLYWOOD — Ever thirsty to expand its ventures, the Board of Directors introduced its latest Seminole product, Hard Rock Energy drink, Dec. 12 during a kickoff party at the Hard Rock Cafe in Hollywood.

Emblazoned with a colorful electric guitar below the Hard Rock logo, the first sets of cans came off the assembly line Dec. 5 in Miami. By the end of the day, 72,000 cans were filled and ready for distribution.

“Everybody believes this is a home run,” Hollywood Board Rep. Steve Osceola said. “We think we have a winner.”

“I have no doubt it will be well received and capture its share of the edgy drink market,” President Tony Sanchez Jr. said. “Music reaches everybody.”

Red Bull and Monster energy drinks each command about 32 percent of the market, followed by Rock Star with about 8 percent, Drow said. The other brands, including Amp and Full Throttle, have about 2 or 3 percent each.

With sales in the U.S. of about $8.3 billion in 2012, according to market research company Euromonitor, 3 percent could be worth hundreds of millions of dollars a year.

The Board is encouraged by the numbers.

“We hope it does well,” Big Cypress Board Rep. Joe Frank said. “If it does well, we’ll be doing great. It’s just another step in trying to diversify the Tribe’s businesses.”

The Tribe, which is the manufacturer of the drink, worked with a national lab to develop flavor profiles for Hard Rock’s three options: original, fruit punch and sugar-free.

Immokalee Board Liaison Dorothy Scheffler went to the Kentucky lab to help develop the flavors.

“It was a little overwhelming; we had to taste a lot and figure out what people will like,” she said. “Then, it was just an idea; now it’s real. It was a great experience and I stand behind the product.”

“We know we have the product,” Drow said. “I’m comfortable with our liquid. The real opportunity is the 15- to 30-year-old demographic that is important to the Hard Rock brand, and one they haven’t captured yet.”

The Board is working closely with Hard Rock International to meet the challenge of bringing a young clientele to the brand and the lifestyle it represents. Because younger people haven’t reached the apex of their earning potential, the objective is to create loyalty to the Hard Rock brand even before they can afford to stay at the hotels or eat at the cafes regularly.

“It’s not about the Rolling Stones or Bon Jovi,” Drow said.

“It’s about Imagine Dragons and Miley Cyrus. We are trying to bring new customers to the Hard Rock brand – we aren’t trying to market to existing customers,” he said.

The customer isn’t the Hard Rock properties either; they’re 7-Eleven, Circle K and other retail stores. The Tribe sells the energy drink to distributors who already have seasoned sales people and relationships with businesses in Miami. They hope to sell about a million cans per month. The drink will be rolled out in other areas in the near future, starting with Chicago in February or March.

“As we grow, we will have other locations nationwide to cut down on shipping costs,” President Sanchez said.

Rep. Osceola has seen the venture evolve since the first meeting took place a couple years ago – before he was involved with the project.

“It’s very exciting for me to help the Board reach this milestone,” he said. “But we still have a lot of work in front of us. People are interested in the product all over the world. We are waiting to get worldwide distribution. It’s a step by step process.”

To make the drink in locations nationwide, the lab sends ingredients for the exclusive formula to bottling companies contracted by the Tribe, who then mix it and can it.

Drow said the rollout marks an exciting time for the Hard Rock Energy drink business but that there is still much work ahead to ensure success. It will take time, he said.

“Once it takes off, it will have exponential growth,” Drow said. “As long as we don’t take a lottery mentality and expect immediate returns, we’ll do better than we can imagine.”