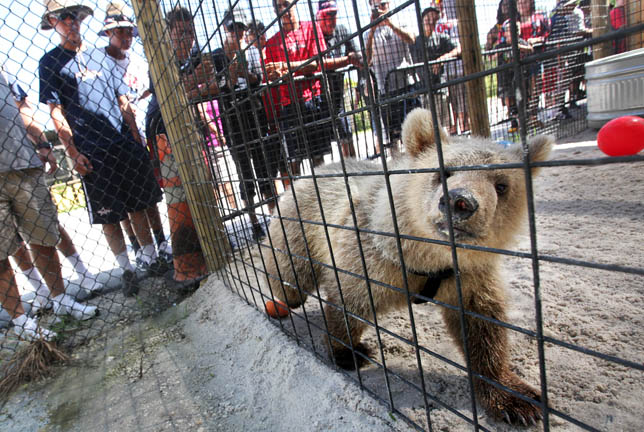 BIG CYPRESS — Life is blooming at Billie Swamp Safari from a sunflower cluster at the Seminole village to the triplet of mischievous toddler otters named River, Kora and Daisy.

Two infant bobcats, a 6-month-old grizzly bear, a cadre of new staff members and a handful of venue renovations are bringing new face to the 21-year-old, eco-friendly tourist destination.

“It’s much better than I remember. So much is improved,” said Paul Mack, of Plantation, who visited recently for the first time since 2007.

Acting director Wovoka Tommie said the place, first and foremost, has a new attitude. Nearly 34 staff members are now cross-trained to handle several job descriptions, which allows for improved customer relations. Everyone is expected to promote a cheerful and welcoming environment.

“We are strong in teamwork and camaraderie. Here, everything is your job,” Tommie said. “These days, when our staff goes out there smiling, people smile back and talk to us. That’s how it should be.”

Small changes paint the bigger, better picture, Tommie said of the makeover that began in mid-2013.

The alligator pit now includes cypress tree features and a waterfall in the sandy upland area. Three large amphitheater chickees provide stadium seating and clear views for spectators of all sizes. Paths that lead guests through the area are artistically fossilized with animal tracks, palm fronds and small swamp creatures.

Inside the gift shop, where recordings of Seminole songs and Everglades wildlife gently sound, the sales floor is cleanly divided into sections for authentic Native American-produced items and souvenirs.

Seven knowledgeable eco-tour guides are on hand for swamp buggy and airboat excursions through the 2,200-acre preserve.

At the expanded Seminole village, a large vegetable garden stands out amid new cooking, sleeping and work chickees. There, tourists view how Tribal families survived, and how some still live, in the Everglades. A pathway cuts through a series of closed, but rustic, chickee cabins for overnight stays.

Mack, who visited with his wife, Marlene, and twin granddaughters Lily and Madelyn, said he would “love” to stay in the chickees that line the adjacent wetland where alligators and other wildlife proliferate.

“It’s a fantastic idea to come out and stay for a few days. Just to be out here in the wilderness would be an adventure not far from home,” Mack said.

About 2,000 visitors a week come through the place during tourist season, Tommie said.

“We’re the only park in Florida that offers everything we do,” he said. “But we’re not extravagant with any of it. What people see is what was always here.”

Big Cypress Councilman Mondo Tiger said current renovations and upgrades will be completed by the end of summer. A rustic aviary for three falcons and an owl, an otter habitat that will include a river feature and shelter, and a half-acre cage for Noogie, the ever-growing baby grizzly bear, are in various phases of construction.

Meanwhile, tourists can watch Noogie, the otters and the bobcats learn to play and thrive in temporary homes under the direction of trainers Jodi Reynolds and Jasmine Shotts.

“We don’t teach the animals to do tricks – it’s about interaction, creating bonds and learning limits. These are never just animals in a cage,” said Reynolds, a 28-year veteran animal handler.

Visitors can see and touch an anteater, skunk, armadillo and other four-legged friends during daily shows at Fort Critter animal theater.

Reynolds said Noogie and most of the other exotic animals are rescues. Liberty, an 8-year-old Florida panther housed at the attraction, was also rescued.

Councilman Tiger said the future will bring more new beginnings. He hopes to see a zip line installed at the scene.

He also noted continuing customer service and menu improvements at the Swamp Water Cafe, under different Tribal management, where tourists can taste Seminole fare: frog legs, gator tail and Indian tacos. For the first time, he said, the restaurant is on the brink of turning a profit.

“Tourists are coming back to the safari, eating at the cafe and giving both better reviews,” he said. “We know where we were at Billie Swamp a few months ago and where we are now. There has been a big difference made but there are more improvements to come.”