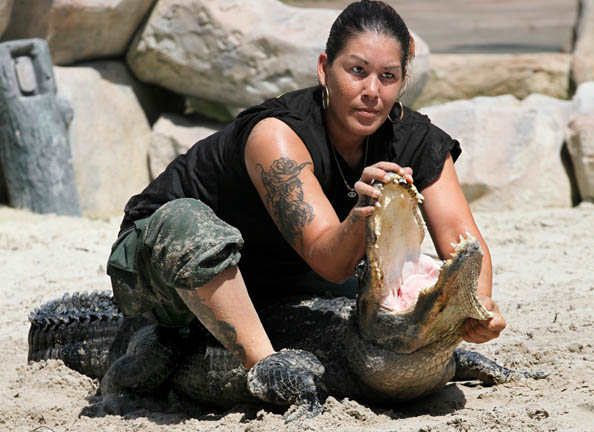 BIG CYPRESS — For the first time since Billie Swamp Safari opened 21 years ago at Big Cypress Reservation, a female employee is wrestling alligators.

Athletic, pretty and brave, Sarah Hall, 27, captivates crowds several times a week when she enters the gator pit for go-rounds with some of the largest and meanest of the attraction’s super-toothy beasts.

“I was raised rough out here in the woods. I’m really just a little country girl or a big tomboy. You pick,” said Hall, who is married to Seminole Tribe member Eli Hall.

A fighter in the Tribe’s youth boxing program when she was just 15, Hall earned her mettle by hunting armadillo, snakes and hogs with her bare hands in nearby Cannon Hammock just 10 minutes from Billie Swamp. She became a tour guide at the venue in 2013.

According to tradition, potential wrestlers must request permission from a member of the Snake Clan. In this case, Esther Gopher, who has carried on the tradition of her matrilineal ancestors, granted the approval.

Everett Osceola, an alligator wrestler and Ah-Tah-Thi-Ki Museum management trainee who has lectured about the practice, said Tribal women are traditionally prohibited from alligator wrestling. The unwritten law dates back to times of great strife, including wars, when the lives of women were held more sacred than men because they ensured the continuation of the matrilineal society.

“Only women bear children and carry on the family,” Osceola said.

Hall, who is Mexican, said no formal schooling could teach her how to maintain control over an alligator in face-to-face performances. For her, experience provided the best education.

“I did some research to be a tour guide and then the critter shows taught me more about the do’s and don’ts,” Hall said. “The only creatures I am afraid of – do not like them one bit – are spiders. They make the hairs on my arms stand up.”

Before entering the pit, Hall surveys the scene to assess the location of every living creature inside, including other handlers who assist during the show, other alligators, turtles and birds. She then says a silent and short prayer before confronting the gator.

“I ask God to guide my hands over the animal,” Hall said.

After the brief meditation, she surrenders her attention entirely to the massive amphibian that can rip limbs from humans in the blink of an eye.

In the past year alone, three wrestlers have been bit by alligators on Seminole reservations. In fact, Billie Swamp employee Mike Alvarado suffered a bite to his hand while training with Hall and Keen. He is recuperating.

“Is it worth the risk? Yes, definitely. My attitude has always been, ‘Whatever doesn’t kill you, makes you stronger,’” Hall said.