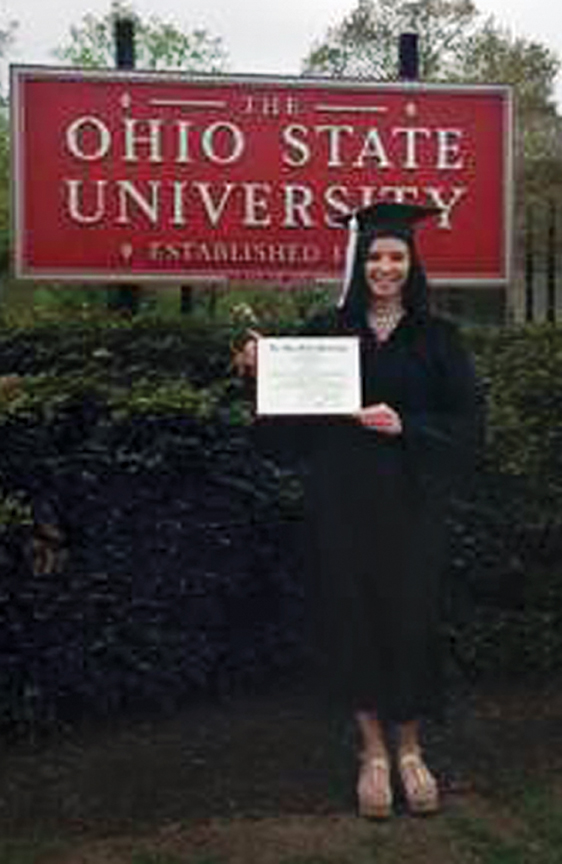 With her Ohio State University degree in hand, Kirsti Zickefoose left her alma mater behind and made her way to Los Angeles for the next chapter of her young life.

The recent Buckeyes communications graduate is pursuing a career with an event planning agency or casting agency to put her hard-earned college education to work in California. Zickefoose, who moved from Florida to Ohio at 7 years old, looks forward to new opportunities in a new home.

“If you’re a creative person, you can go multiple paths with a communications degree,” the 22-year-old said. “I’ve visited California before and loved it. The weather is perfect.”

Because she grew up in a small town and graduated high school with a class of 152 students, Zickefoose knew she wanted to attend a large college. Throw in the gung-ho zealousness shared by most Ohioans for Ohio State, and her college choice was easy.

She left home to join 43,000 undergraduates in Columbus. Zickefoose said college life was an adjustment.

“In high school, you have to go to school,” she said. “In college, there’s no one there telling you that you have to go. You have to be very disciplined to go to classes and to study adequately.”

To stay motivated, Zickefoose said she surrounded herself with driven people who strive to succeed. She landed two internships – one with Columbus Media Enterprises and the other with Clear Channel radio – and earned a job as a college tour guide through a competitive application process at Ohio State.

During her internships, she learned what she liked about the communications industry and what she wouldn’t want to pursue after graduation. With the promotions department at Clear Channel, she had the opportunity to promote the company at movie premieres and concerts, including Taylor Swift, Bon Jovi and Rascal Flatts. With the events department at Columbus Media, she helped plan a bridal show.

Although internships were not required, Zickefoose wanted to give herself an edge over other college grads when competing for jobs.

“I knew that if I wanted to pursue something like that after school, it would be a good idea to have that experience,” she said.

Zickefoose is proud to be among only a handful of people in her family to graduate college, and she encourages her fellow Tribal members to chase their college dreams, even if they don’t know what major to study.

“It’s rewarding. If you are considering it, then go for it,” Zickefoose said. “You don’t need to know want you want to do. There are plenty of people there who can help you.”