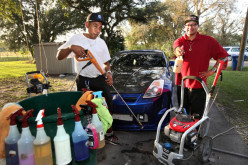 BIG CYPRESS — What began with a bucket and hope has become a growing business of soap.

Brian Billie and best friend Mark Furlonge, co-owners of Bug Out Car Wash based in Big Cypress, say the business they founded just one year ago is successfully blossoming thanks to the semiannual, super pesky lovebug.

“I think we’re the only people on Earth who love the lovebug. We call them ‘money in the bank,’” Billie said.

But the buddies who call themselves brothers were not always so cheerful. The operation was born from desperation when Furlonge was suddenly laid off from a management position in the car rental business and Billie was battling legal woes.

During a visit to Furlonge’s Fort Lauderdale apartment to repay a $20 debt, Billie was alarmed when he saw no food in the refrigerator and Furlonge “losing his mind” because he could not pay his rent, car payment or utilities.

With Billie’s endorsement, after being taken in as family by Billie’s mother, Patsy Billie, Furlonge drove to Sadie’s at Big Cypress Landing general store and restaurant “with a bucket and hope” and began washing cars, coincidentally in the height of lovebug season.

“We got slammed with customers who needed the bugs out. Then people came back asking if I could wash their cars all the time – hence Bug Out Car Wash,” Furlonge said.

Meanwhile, while Furlonge helped Billie through several serious health and legal issues, Billie sponsored Furlonge, a transplant from Trinidad, to become a citizen of the United States and apply for a small business loan.

Now, the company boasts 32 regular individual customers and three corporate accounts. Two pressure cleaners, a large supply of cleaning agents, a transport trailer and a work tent have been added to the company assets and the business loan is fully paid off.

With help from friend Erica Zpringer, who is a photography student at the Art Institute of Fort Lauderdale, the company has a Facebook page and website and recently launched a Bug Out Car Wash clothing line much in the wearable gear style of popular television shows “Overhaulin,’” “Fast N’ Loud” and “Counting Cars.”

The company slogan is, “We get the bugs out before you bug out!”

“I never thought things would be good so soon. I believed it would happen in the future – much later future,” Billie said.

The company took off quickly but the friendship is more than a decade old.

Billie and Furlonge met in 2000 at the Speed & Truck World race car parts store in Fort Lauderdale. Billie, the founder of the Unconquered Car Club, was having a hood ornament made. Furlonge was building a custom 2000 Celica GT-S. Two years later, Furlonge’s car was used for several scenes in the “2 Fast 2 Furious” movie, and Billie and Furlonge were cast as extras.

“I told casting that if they wanted my car, they had to take me and Brian,” Furlonge said.

Debra Ray, the assistant director of Family Services in Big Cypress, said the duo keeps the department’s vehicle fleet immaculate inside and out. Bug Out also services the Big Cypress Recreation Department and is close to finalizing a deal to serve a third Tribal department.

Billie is the face of the operation while Furlonge is the business manager.

“The cars are always cleaned and detailed very, very well. They are so helpful. Whenever we’ve called for anything, they are here and ready to do the job,” Ray said.

The company offers VIP treatment, especially for Tribal elders. Cars can be picked up at homes or businesses, detailed at the Bug Out premises and then delivered back. During Thanksgiving week, discounts were given to show customer appreciation.

Regular customers get text messages to alert them to seasonal specials. The Facebook page and website promote deals and provide information about other car industry businesses that include body shops and electrical services.

So far, the company serves the Big Cypress community but occasionally accepts clients outside the reservation. A new company truck and a portable water container, to be purchased in coming months, will allow the business to expand to Immokalee and Hollywood.