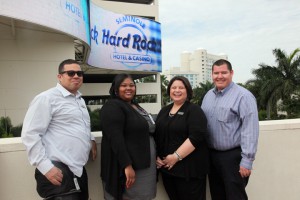 Gaming plays a paramount role in the prosperity of the Tribe. In an effort to get Tribal members involved in all aspects of the gaming business and ensure that profits continue, Seminole Gaming operates the Tribal Career Development Program.

The program encourages Tribal members to consider the gaming and hospitality industry as a career. Started more than eight years ago, it is a paid work/study program where interns are management trainees who get on-the-job training in every department.

“We are trying to develop leaders for tomorrow,” said John Eder, senior vice president of finance with Seminole Gaming. “It’s all about growing the individual into the job.”

Participants in the program learn all aspects of the gaming and hospitality industry by working in every department for a few months, performing a variety of jobs in each. Departments include table games, slots, cash operations, poker, public space, marketing, banquets and catering, food and beverage, Hard Rock Live, hotel operations and the Hard Rock Café. The first phase of the program, in which a trainee works in each of the departments, can take up to three years. Being a 24-hour business, interns work every shift to see the differences between customers at different times of day.

The program consists of five phases. Phase two places trainees in supervisory positions for a few months each in their choice of four departments. After phase two, a trainee can choose a job and start working or continue on to the last three phases of the program. During phase three, trainees work closely with the director of the department while working in their regular positions. In phase four, they work directly with the general manager and president of the company and in phase five, with a senior vice president. The entire program can take six or seven years to complete.

“This is a way for people to work their way up the ladder while learning from the best,” said Ervina Capricien, program director. “It’s like an apprenticeship; they get hands-on and managerial experience. Our interns are lucky they get to interact with senior management.”

Capricien graduated from the program, which gives her insight into what the interns go through and what each department needs from them. She expects the same from the interns as any other employer: Come to work on time, follow policies and procedures, and work hard.

“We want people who want a career and want to learn,” Capricien said. “Sometimes, people get comfortable in a department and stay much longer than a few months. Some of our interns have been with us a long time.”

The program usually has about 15 interns at a time, but Capricien wants to expand that to 20 by October 2013. The criteria to join the program include being a Tribal member age 18 or older, (the current interns range from age 20-51), have a high school diploma or GED, and pass a background check and a drug test. Few have graduated from the program, but those who have showed motivation from the start.

“Sometimes, we get interns who have never worked, so it takes time to teach them to have a work ethic,” Capricien said. “When I was an intern, all the interns were in their 30s; we were the ones who grew up without the dividend. Younger people grew up with the dividend, and many never worked before joining the program. We are looking for people who want a career and want to learn.”

Ella DeHass completed the program four years ago and now works in the Finance Department of Seminole Gaming. She was hired by Betty Jones Goosens, who started the program. When DeHass entered the program she had already earned a bachelor’s and two master’s degrees from Oral Roberts University. “I learned the nuts and bolts of how to run a casino and hotel,” DeHass said. “To succeed, you need a strong work ethic.

When you walk in the door, there is no guarantee you’ll stay, but it is guaranteed you will work and learn. It’s a hands-on program. You have to be willing to work for it; it isn’t going to be handed to you.”

Karissa Tommie, an intern in phase two in at the Hard Rock in Tampa, joined the program two and a half years ago because she heard it was a good opportunity.

“It’s been better than I expected it to be; it’s more in depth,” said Tommie, 25, of Tampa. “It keeps my interest, and I keep learning things I didn’t know before. When I finished phase one, I felt like I accomplished something. Going through the program has been a challenge, but it keeps me busy and focused all day.”

Neil Baxley, an intern in phase one and also a project manager at the Big Cypress Casino, didn’t know what he was getting into when he joined the program five and a half years ago. His background is in electronic engineering, and he thought he would work on the slot machines. Once he got into the program and started learning the different aspects of the industry, he was pleasantly surprised.

“At first I just wanted a job, but later I changed and wanted to be a director of a department. Now, I may want to be a general manager or CEO one day,” said Baxley, 33, of Hollywood. “This is a really good program; you get paid and learn from the best people in the business. Every day, I’m working alongside the leaders of the gaming industry. Hands down, its one of the greatest opportunities a Tribal member can have to start a career.”

Summer Billie, an intern in phase one at the Seminole Casino Immokalee, wanted a career in gaming when she joined the program about two years ago. Her goal is to become a general manager of a casino or work in human resources.

“I enjoy the environment of the casino,” said Billie, 23, of Fort Myers. “Going through all the departments, you get to understand everything and how they interact and affect each other. Every day is a new learning experience. There is never a down or uneventful day; you’re always learning something new. A good thing about the program is you get to try everything, so you can see where you fit in and what works for you.”

Jason Don Billie, an intern in phase two at the Hard Rock Hollywood, wants to be able to help the Tribe and plans on a long-term career in Gaming. He has been in the program on and off for about eight years. He also worked in the Recreation Department, and he currently works at the Hard Rock Live booking entertainment and making arrangements.

“It beats sitting at home,” said Billie, 39, of Hollywood. “I like the variety in the job; it’s not the same thing every day. I look forward to getting up, coming to work and hearing another story about what happened the day before. Having the know-how and education of how the casino runs adds value to the company and to the Tribe.”

Jim Osceola, an intern in phase one at the Hard Rock Hollywood, joined the program because he is a workaholic and didn’t have enough to do. After attending Johnson & Wales culinary school, he lived in Croatia, Romania and the United Kingdom where he worked in the culinary field cooking and training people to manage resources. He also took business classes in Switzerland, Italy and Spain.

“I joined the program because I thought I wanted to use my culinary degree as an asset to the gaming industry,” said Osceola, 51, of Hollywood. “I brought a lot of management skills with me, and I’ve learned a lot about the gaming business. It’s a fantastic and well-run organization and a pleasure to work there. The core of the program is to develop people for upper management, and I feel like I’m contributing to the future of the program and Gaming.”

Osceola also teaches public speaking to interns at all five casinos, which he believes is an important leadership skill.

The consensus among those who are in or have been in the program is that more Tribal members need to get involved.

“This is for the Tribe, not just for me,” DeHass said. “I wish there were more Tribal members who are willing to put themselves out there and join the program. Gaming accounts for 90 percent of the Tribe’s revenue, and we need Tribal members to take the baton.”

Capricien knows how vital the program is to the Tribe.

“This is an awesome program. I wish more Tribal members would get into it,” she said. “It’s an awesome business, and people need to know more about it so they can take care of it in the future.”

For more information about joining the Tribal Career Development Program, contact Ervina Capricien at Ervina.Capricien@stofgaming.com or call 954-585-5120 or 954-682-6504.