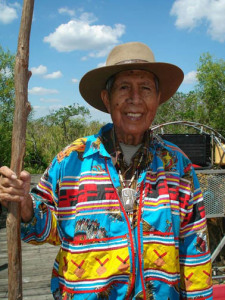 MIAMI — William Buffalo Tiger, the first Chairman of the Miccosukee Tribe who helped his people gain federal recognition in the 1960s, passed away Jan. 6 surrounded by family at his Miami home. He was 94.

The Miccosukee trailblazer served for 24 years as Tribal Chairman, helped create United South and Eastern Tribes (USET), fought for the Tribe’s right to use resources in the Everglades and challenged the federal government for recognition by meeting with Fidel Castro.

About 150 mourners paid their last respects at his funeral Jan. 8 at Woodlawn Park Cemetery South in Miami.

Buffalo Tiger was born in the Everglades in 1920 when the water was so clear “he could see fish dancing in the streams,” said his son Lee Tiger, who spoke at length during the funeral and recounted how his father became leader of the Tribe.

“My father’s first accomplishment was putting an end to what I call ‘living on display’ at Musa Isle Indian Village on the Miami River,” Lee said. “The Miccosukee went back to the Everglades and the Seminoles went back to Hollywood, Big Cypress and Brighton. He knew living that way wasn’t dignified.”

In the early 1950s, Buffalo Tiger was appointed the Tribe’s spokesman and served as liaison between the Miccosukee Tribe and the state and federal governments. In 1955, Everglades game wardens regularly harassed Tribal members for fishing without licenses and cutting down palmetto fronds used to build chickees.

Buffalo Tiger met with then Gov. LeRoy Collins to resolve the issue.

In 1959, when the Tribe sought federal recognition status, the U.S. government said they missed the deadline by a year. Without federal recognition, the Tribe would not have their lands held in trust or receive federal aid. Buffalo Tiger responded by accepting an invitation from Fidel Castro to visit Cuba, where Castro offered the Tribe sanctuary in his country.

When Buffalo Tiger returned from Cuba, the government agreed to recognize the Tribe if they never went back to Cuba until relations with the U.S. normalized. The Miccosukee Tribe of Indians of Florida received federal recognition on Jan. 11, 1962.

“We knew him as ‘Pop,’” said his son William Buffalo Tiger Jr. “He taught through example. The trip to Cuba was so far out of normal, I don’t know if I’d be brave enough to do that.”

Once the Tribe opened its own school, Buffalo Tiger fought for the right to teach students Miccosukee traditions. He also shared his culture and love of the Everglades with non-Natives through his business, Buffalo Tiger’s Airboat Tours, which he ran into his 90s.

“He fought for the generations to come, so they would have a strong foundation,” William said.

Other speakers at the funeral described their admiration for Buffalo Tiger.

“A great man is gone and will be missed by many people across Indian Country,” Hollywood Councilman Chris Osceola said. “He set the bar for Tribal leaders. I’d like to follow any way I can in this man’s footsteps.”

Buffalo Tiger served on the USET Board of Directors for 17 years and was named President Emeritus in 2010.

“Chairman Tiger leaves a legacy of leadership, political, social and civic activism that will be greatly missed,” Miccosukee Chairman Colley Billie wrote in a statement. “Throughout his life, Chairman Tiger epitomized the ideals that you should fight for what you believe, speak when others are afraid, lead when many others only follow, love your family, embrace your culture and respect nature.”

Lee respected and loved his father.

“My father lived a full life and I’m proud to say I’m his son,” he said. “I was lucky to have been chosen to be his son.”