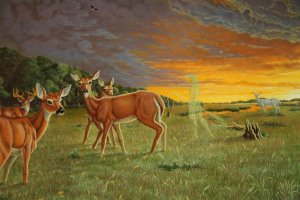 ARCADIA — Guy LaBree finished his last painting only a few days before he drew his last breath. Several deer in a lush green Florida prairie are suddenly alert beneath an ominous sky in waves of purple and yellow. A Seminole warrior, depicted by LaBree as a barely visible ghostly spirit in a long shirt holding a pole, stands in their midst, unseen but sensed by the nervous deer.

The painting hangs on a living room wall in the double-wide trailer where LaBree passed away on New Year’s Day. Every direction inside features his deep, colorful paintings of his favorite subjects: wildlife, landscapes and Seminole Indians of Florida. In the tiny, cluttered room where he painted hundreds of masterpieces, his old wooden easel is empty and his cowboy hat hangs from a corner.

On a shelf lies LaBree’s legendary palette, thick with more than 60 pounds of oil drippings, like a miniature mountain range filled with all the hues, tints, shades and blushes of the rainbow. It is still wet, waiting for the master to dip his brush and swirl his colors to life.

His wife of 53 years scurries about, keeping it together, cleaning and trying to follow her husband’s directives: no funeral, no celebration, no guitars playing, no gathering of friends and fans. He was to be cremated and his ashes strewn about their 10-acre wooded homesite in Pine Level near the Peace River.

“We thought he was gone 12 years ago when he had his heart attack,” Pat LaBree said. “He said he never wanted to go through that kind of pain again; he didn’t want anything special to bring him back the next time. I thought he would just slowly wind down, but we had another 12 years. I consider that a wonderful gift.”

During those last years, third generation Floridian Guy LaBree was honored by the Stetson Kennedy Foundation with its Fellow Man and Mother Earth Award, as well as the state’s Florida Folk Heritage Award. In his letter nominating LaBree for the Heritage Award, Seminole Chairman James E. Billie wrote: “I have seen many famous artists and their paintings of Seminoles and Seminole life. Guy LaBree, however, tops them all with his accurate depictions of the way of life of the Seminole.”

She agreed to participate in a Celebration of Florida Master Artist Guy LaBree (1941-2015) event Feb. 21 at their friend Mac Martin’s gallery in Arcadia. The gallery, which will feature an exclusive art show of Guy LaBree’s work, opens at 10 a.m. Later, a welcome and remarks session is scheduled for 4 p.m., followed by a pot luck dinner at 6 p.m. and a song and story circle at sunset. (Guy LaBree was also a guitar player and songwriter who regularly met with friends to play music.)

“I want to invite all the Seminole and Miccosukee Indians who knew Guy to attend. We will be celebrating the life of a very talented and important Florida artist,” said Martin, a folk music songwriter and Desoto County realtor. “There will be Guy LaBree original paintings and prints on display – and for sale – that day.”

Backhouse and Snapp said the Museum will feature a large-scale exhibit of Guy LaBree’s paintings this June, including a re-creation of his famous work studio with the original easel, chair, palette and brushes to be loaned to the Tribal Museum by Pat LaBree.

“When we walked into that studio, a chill immediately came over me. It was like he was still there somewhere,” Backhouse said. “It was like seeing Hemingway’s typewriter. The very place and tools he used to create all those wonderful paintings.”

Backhouse said Guy LaBree’s work hangs in the Smithsonian’s National Museum of the American Indian in Washington, D.C. and throughout many Seminole government buildings.

Ah-Tah-Thi-Ki owns the complete collection of the Seminole legend’s paintings from Betty Mae Jumper’s book “Legends of the Seminoles” that he illustrated.

In addition to his wife, Pat, Guy LaBree is survived by three children, four grandchildren and six great-grandchildren. The family suggests contributions be made in Guy LaBree’s name to the Make-a-Wish Foundation.