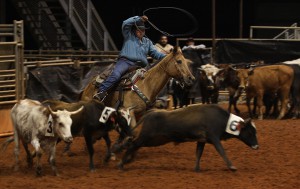 BIG CYPRESS — Country music, a haze of red clay and the scents of horses and hot dogs welcomed spectators to the first Cowboy Resolution Rodeo at the Junior Cypress Rodeo Arena from Jan. 4-5.

Team sorting, team tying, calf branding and other ranch rodeo events kept everyone in their seats with eyes peeled on teams of men and women who competed for bragging rights and a share of nearly $6,000 in cash prizes.

Tribal member Moses Jumper Jr., a lifelong horseman and director of the Big Cypress Cattle Committee, served as the rodeo’s announcer and emcee.

“We have a history with horses and cattle that started long before the Tribe was even called Seminole,” Jumper said.

Native Americans started organized cattle raising programs in the 1930s. Rodeos put on for cowboy competition and entertainment naturally followed. In the 1950s when the Tribe sought recognition from the federal government, rodeos were presented as the predominant source of community income.

“Rodeos were the first money-making proposition we had,” Jumper said.

In 1996, the Region 13 Eastern Indian Rodeo Association (EIRA), made up of Tribal members, joined the Indian National Finals Rodeo.

The recent rodeo at Big Cypress was produced for exhibition and entertainment said Alfonso Tigertail, who became the Rodeo program director in September 2012. It was open to all area cowboys, Tribal and non-Tribal.

“Hopefully, we can build on the Resolution Rodeo and make it an annual event or part of an ongoing series of events,” Tigertail said.

Tigertail said the next rodeo rough stock competition scheduled for the Junior Cypress Rodeo Arena will be the Bill Osceola Memorial Rodeo from Feb. 8-9. The Junior Cypress Cattle Drive and Rodeo will also be held at the arena on March 23.