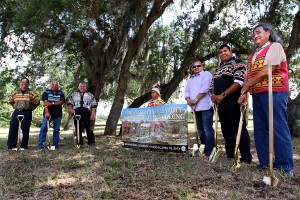 BRIGHTON — Armed with gold-colored shovels, Seminole officials turned dirt during the groundbreaking of a planned $27-million new home for 23 Tribal departments, including Police and Fire Rescue, on the Brighton Reservation.

The April 16 ceremony heralded the start of construction for the long-awaited 111,000-square-foot Public Safety Administration Building.

“Today is a really big day because we finally get what we deserve,” Brighton Board Rep. Larry Howard said. “We’re now building for our own people in a joint venture that hit the ground running and hasn’t stopped.”

That joint venture formed last year with the Tribe and Stiles Construction, a 60-year commercial real estate, design and construction firm based in Fort Lauderdale. Informally called “Seminole Stiles,” the partnership promises a busy future of building growth throughout the Tribe’s reservation network.

Already completed in 2013 were a 140,000-square-foot renovation of the Seminole Classic Casino in Hollywood and the construction of the Noodle Bar at Hard Rock Hotel & Casino Tampa.

The Brighton public safety complex project is scheduled for completion in October 2014. The buildings should be ready for operations beginning in 2015.

“This was finally dropped in our laps in April last year after being on the table for several years before that,” said Gloria Wilson, the Tribe’s Community Planning director. “We’ve pushed real hard during the last year to really make it happen.”

Nelson said the Tribe will apply to have the building LEED (Leadership in Energy & Environmental Design) certified by the U.S. Green Building Council. Officials said energy costs for the building will be 18 percent lower.

The complex will consist of three buildings for Administration, Public Safety and Maintenance. Several chickees and smaller buildings will dot the campus to create a camp-like atmosphere. Most of the live oak tree clusters that have existed for decades on the land will remain untouched.

“Many hours and nights have been spent (in planning), but it has been an investment to make the project come together,” President Tony Sanchez Jr. said. “It’s one thing to see the plan on paper…I can’t wait to see the final product.”

Structures will be situated in conversation-like relationships “with the river of oaks running through them,” Murguido said. “That’s how you take two large buildings and make them secondary to the environment.”

And, while the work calls for nearly 200 construction workers to descend upon the reservation throughout the next 18 months, privacy will be upheld, said David Lowery, Stiles’ director of public projects.

“Quality will not be sacrificed for profit, and we will maintain as much privacy as possible,” he said. “We will try to be as invisible as we can.”

Wilson, who spent most of her life in Brighton, said she was barely 11 years old when she won an elementary school contest about how students envisioned the future of the reservation. She considers herself still winning.

“I always think about that contest when I look around the reservation and I see everything I imagined. Everyone thought I was crazy then, but look now – we have an airport, a clinic, a police station, and we are still building,” Wilson said.

Seminole Police and Fire Rescue employees turned out to view an architectural model of the campus and to celebrate the coming of their future digs. All were thrilled.

“The Seminole Tribe recognizes the character and value of the people who represent them,” Police Chief William Latchford said. “We are blessed that they support us and that public safety is important to them.”