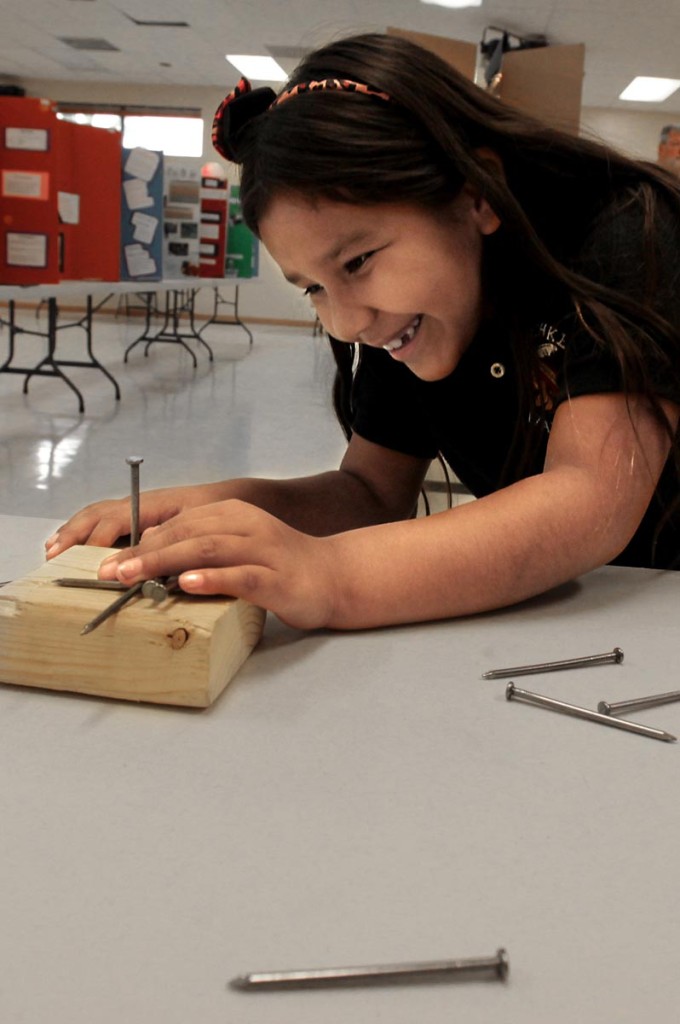 BIG CYPRESS — Fashion and food were fodder for many presentations at the 2013 Ahfachkee School science fair.

From fabric dye made of berries to honey hair lightener, things edible and personal made for recurring components in nearly a third of dozens of projects that lined tables Nov. 14 at the Big Cypress Boys & Girls Club auditorium.

“Both are everyday things students can relate to,” said the school’s science teacher Elizabeth Jack. Each presentation, food-based or not, included an abstract research question, hypothesis, test procedures, experiment results and final conclusions.

“It’s a natural alternative that anyone can do – and we learned about it at a school science fair,” she said.

Other food-friendly projects included: “Egg is an Egg” to determine if brown or white eggs float best; the “Hershey vs. Hershey Challenge” to find which chocolate bar melts fastest; and “Magnet Cereal” to measure the amount of iron in four different cereals by using a magnet to extract pieces from the bag.

More traditional projects also answered important questions: Can the color of a roof absorb more energy; what type of light speeds bacteria growth; do we know what is in the water on Big Cypress Reservation?

Ramona Jimmie said her project was inspired by the beauty of nature. Ramona plucked leaves from several different plant species; then, by soaking the leaves in laundry detergent, she created delicate and ornate leaf skeleton art.

“I didn’t win or place but I didn’t do it to win. I learned,” Ramona said.

“This year, the projects were more about quality than quantity,” Jack said.

Because of increased costs, according to the American Indian Science and Engineering Society that hosts the national event, the annual fair will be staged virtually via the Internet for the first time in the organization’s 36-year history.