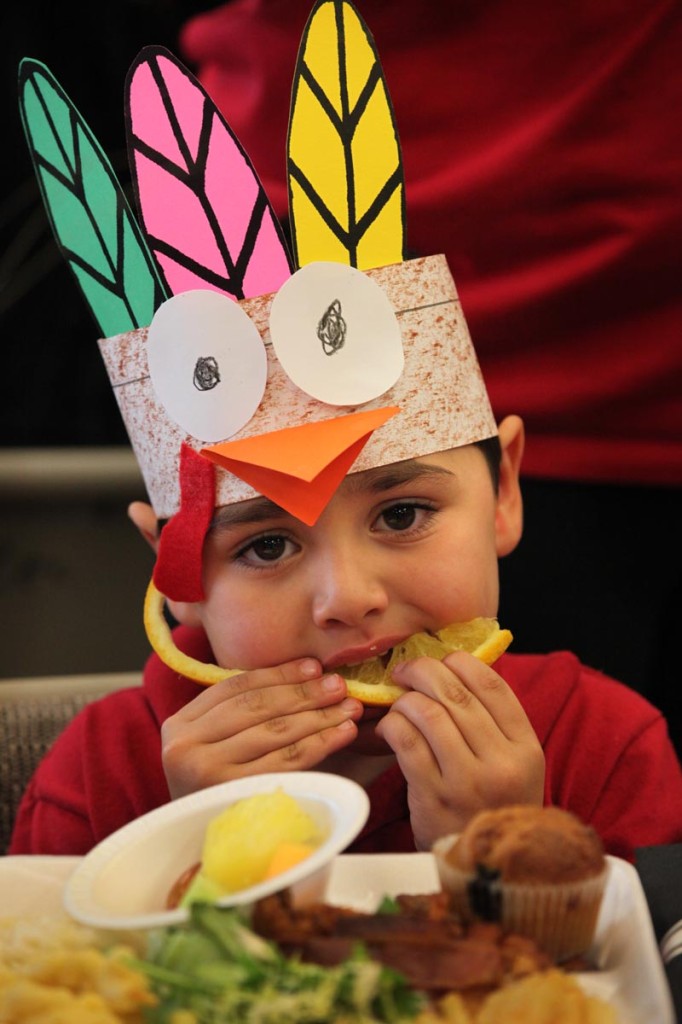 BIG CYPRESS — Basketball, church, family and earth – but not necessarily in that order – were the things Ahfachkee School student Nicholus Andrews was especially thankful for this Thanksgiving. He even inscribed those words around his hand-painted chubby turkey on a holiday plate.

But for Seminoles, Thanksgiving Day does not include the romanticized myth that pilgrims from England and Native people sat down for a meal in 1621 then lived happily ever after.

“We reinforce to our children that they are Native American,” said Mary Jene Koenes, Ahfachkee’s curriculum specialist.

Though turkey and cranberries can be on the menu, traditional Seminole foods make the holiday special.

“I love it when I ask a child what they will eat on Thanksgiving and they tell me deer meat and frybread,” Koenes said.

“We are thankful for the bountiful blessings of food on our tables, clothes on our backs and roofs over our heads,” said the Rev. Arlen Payne, of Big Cypress New Testament Baptist Church, as he led nearly 200 students, parents and teachers to feast.

For Erin Buster, her husband, Alvin, and sons Leviticus and Ezekiel, the brunch was about being grateful for “everything good in our lives.” Buster said the family usually spends a portion of Thanksgiving Day in church. It is a tradition passed from her great-grandfather Frank Billie and her mother Betty King, Ahfachkee’s administrative assistant.

Buster said most of the Tribe’s children grow up knowing the real story that surrounds the historic Thanksgiving meal shared by the Wampanoag people and Pilgrims in 1621.

“We don’t hide anything from them,” she said.

According to an account from Plimoth Plantation, a major historical attraction in Plymouth, Mass., staffed by 23 mostly Wampanoag, the Tribe had already lost one-third of nearly 100,000 of their people from disease brought by white explorers when they arrived in 1616. Others in the Tribe had been captured then sold as slaves.

About four years later, the Wampanoag watched as white families encroached on Wampanoag land and built a village, all the while suffering many deaths under harsh, unfamiliar conditions. An Abenaki chief, Samoset, was first to visit the settlement. Later, he brought Squanto, a Wampanoag, who taught the English how to fish, plant corn and gather edible plants and berries necessary for survival. The groups entered into a mutual protection alliance.

In the fall of 1621, after crops yielded a surprising large bounty, the Pilgrims planned a harvest feast. Men went into the woods to shoot fowl for meat while others celebrated by shooting guns in the air. Hearing the gunfire and fearing an attack, the Wampanoag, led by Massasoit, showed up at the village expecting an altercation but were greeted instead. That’s when Massasoit sent his men hunting for enough deer, fish and other meat that would last a few days while they kept close watch over the white settlers.

The two groups shared food during the ensuing three-day harvest feast, but they likely did not sit down at the same table dining on turkey and pumpkin pie.

Koenes said her family did not commemorate the American-made holiday when she was a girl, but they knew it existed because it was on the calendar.

“It was not our creation. For us, Christmas was the big sacred day,” Koenes said.

Ahfachkee students Nigel Wells and his brother Anthony said they know that the Indians helped the Pilgrims learn how to survive when they came to the new land. But they do not celebrate the storybook version of Thanksgiving Day.

“In school, we saw a video about what Thanksgiving really means to us. It means being grateful for God, food, family and friends all the time but especially in November,” Nigel said.