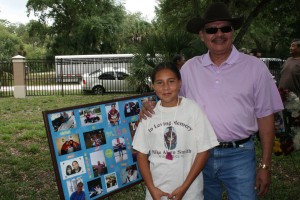 BIG CYPRESS — Family man, good friend, inspiration and hard worker were all words used to describe the late Mike Allen Smith on April 28 as family and friends gathered for a memorial horseshoe tournament in his honor.

Tribal members from Big Cypress, Brighton and Hollywood joined together at Oneva Smith’s house on the Big Cypress Reservation to remember and celebrate Smith’s life.

“He is gone but not forgotten,” Smith’s aunt Alice Sweat said.

As guests arrived, family rushed to bring out the food at the scheduled time.

“Mike always liked to be on time,” said former President Richard Bowers, a good friend to the late Smith. “Everyone was freaking out because the food didn’t arrive on time.”

Sweat and her sister Jenny Johns, both of the Brighton Reservation, sang Amazing Grace in English and then in Creek before Mike Tiger, pastor of the First Indian Baptist Church in Brighton, said a blessing.

In the end, lunch went off without a hitch and family and friends enjoyed a hearty meal and fellowship. People mingled and looked at photo collages on display of Smith’s life.

“The pictures remind me of all the memories we had,” Bowers said. “He was a do-er, a hard worker and a cattleman.”

“All the things we did were funny,” Big Cypress Councilman Mondo Tiger said. “He had visions.”

Councilman Tiger shared how Smith had the idea of making a modern home in the design of a traditional Seminole chickee.

“I wish he would have finished it,” Councilman Tiger said.

Even though Smith battled addiction, he strove to show his daughter, Julia Smith, that it was never too late to make a change. His daughter was his inspiration.

Smith enrolled in rehabilitation and took it seriously, even helping out around the rehab refuge. He put his Seminole skills to use building a chickee on the grounds.

“He wanted to help save his Tribe from the silent killer,” Tommie read. “He was so much more than he realized.”

Smith’s niece Danyelle Boromei sang I Can Only Imagine for her late uncle and said she wants people not to remember the man who partied, but the man who cared so much for others and who always put a smile on everyone’s faces.

“People forget how you fall; they remember how you pick yourself up,” Big Cypress Board Rep. Joe Frank said. “It was a privilege to know Mike and be around him.”