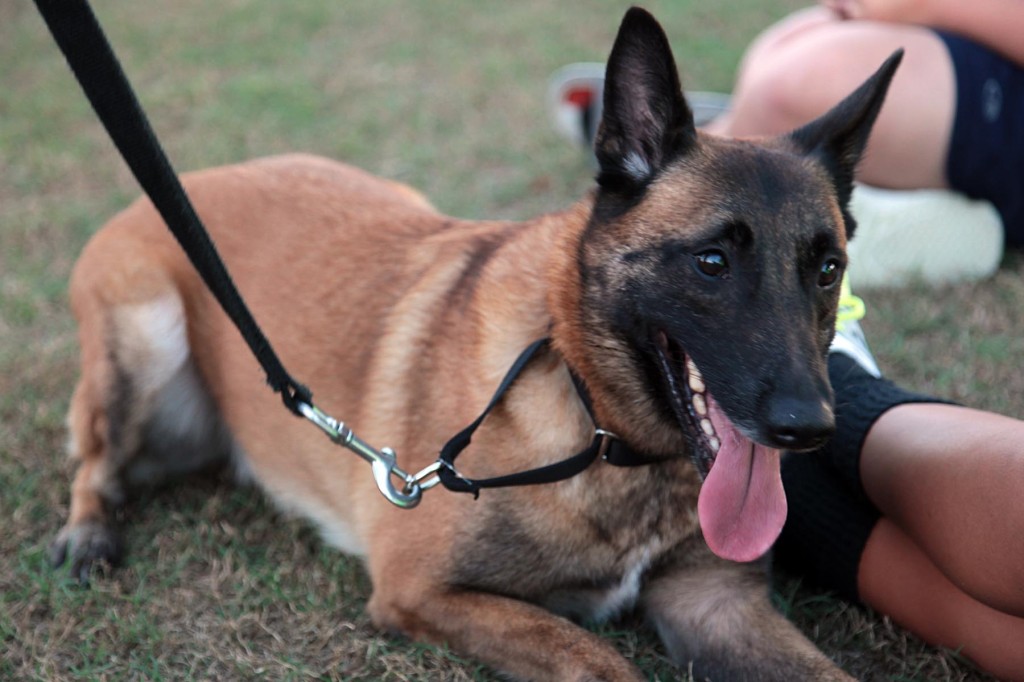 HOLLYWOOD — All police officers train thoroughly for their jobs, but they don’t all have two legs. Bara, a 5-year-old Belgian Malinois, uses four legs to do her job as a narcotics canine with the Seminole Police Department.

Officer Jody Certain brought Bara to a Hollywood Police Explorers meeting Oct. 29 to demonstrate the dog’s skills while showing students what occurs during traffic stops when drugs are suspected inside the vehicle. The

Explorers took turns riding in a car and getting “pulled over.” Once the students were out of the car, Bara sniffed them and quickly detected the scent of drugs.

The kids didn’t actually have drugs, but community service aide Terry Tartsah put a piece of tape rubbed in drugs on at least one Explorer in the vehicle. He also planted tape inside and outside the car.

Bara found the hidden “evidence” during each demonstration.

As reported in an article on PBS.org, a dog’s sense of smell is 10,000 to 100,000 times more acute than humans. They can detect a teaspoon of sugar in a million gallons of water, or two Olympic-sized pools worth, said Alexandra Horowitz, a dog-cognition researcher at Barnard College, in the article.

Bara can detect six kinds of drugs: marijuana, crack, cocaine, MDMA, methamphetamine and heroin. Dogs alert their human partner in an aggressive or passive manner. Aggressive alerts include barking or scratching; passive alerts can be sitting or lying down at the site of the odor. Bara alerts passively.

“Everyone works for a paycheck,” Officer Certain told Explorers. “Bara does, too. Who can guess what her paycheck is?”

Explorers guessed doggie treats, food and toys. The right answer? Toys. Bara gets her favorite tug-of-war toys after each search – even during the Explorers’ meeting.

Certified by the United States Police Canine Association, Officer Certain has been a K-9 officer for four years. She won awards at the Southern Coast K-9 convention for two consecutive years when she competed against veteran K-9 officers with 10 to 15 years of experience.

During the class, Officer Certain commanded Bara in a language other than English, as most law enforcement officers in the United States do, so only handlers can control them. As a single-purpose dog, Bara’s sole responsibility is to sniff out drugs in airports, schools, post offices, cars, homes and on the streets.

As the demonstration neared the end, Bara played with the reward toy a little longer and gave up the reward a little more reluctantly. Officer Certain said it was a sign that Bara was tired. Like people who work or study all day, police K-9s also need a break and Bara had earned time off.